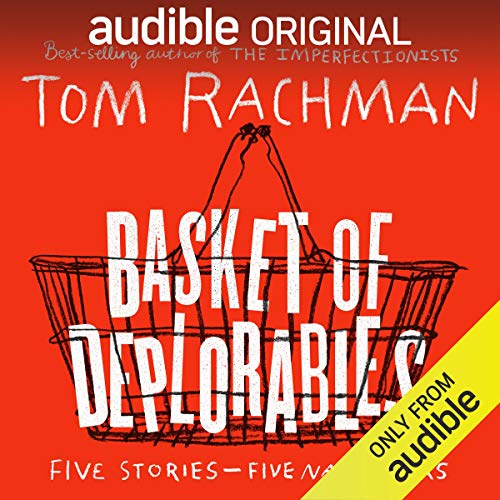 Now, in the shadows of a seismic shift in American politics, comes his timely and hilarious new work. Basket of Deplorables takes an incisive and satirical look at the United States in the era of Trump data breaches, liberal self-righteousness, red-hat rancor, Starbucks macchiatos, Ultimate Fighting factories, and Internet sinkholes.

Written for Audible and featuring a shifting array of disparate voices, the five intricately linked stories take listeners from an Election Night party in Manhattan to a funeral populated by fake mourners in Lansing, Michigan, to an online date in an era when every email platform in the world has been hacked and, ultimately, to a reality where the impossible, the unthinkable, becomes all too real.

In Basket of Deplorables, Rachman has created an urgent and deeply satisfying work that will continue to cement his place among the great literary stylists and cultural observers of our time.

"Tom Rachman’s masterful collection provides an early literary look at Trump-era America…. These bang-up-to-the-minute stories feel like essential reading as we get to grips with a bizarre new era." (The Guardian)

"These five linked stories share the same deft characterization, buoyant wit and imaginative richness of Rachman’s lauded novels The Imperfectionists and The Rise and Fall of Great Powers." (The Evening Standard)

What listeners say about Basket of Deplorables

This was a treat -- a perfect batch of stories. Hilarious and incisive and everything that fiction does best. It's the only intelligent way to process the political climate now while laughing.

My post election psychotherapy is going to be a long, necessary and at times an arduous journey and audiobooks are a definitely integral part of it. This book ensnared me with its appropriate title but each segment is an accurate depiction of everything that is wrong with some people in this great country. I think that is all i need to say. Witty, bittersweet, factual and pregnant to an array of reflections...

I just felt that this book was random and I wasn't so sure what the point was.

Do not waste a credit.
This is not what the title implies it is a jumble of disconnected short stories . I want my credit back.