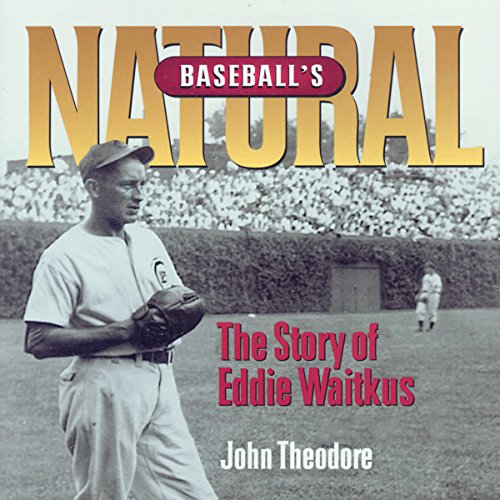 By: John Theodore
Narrated by: Kevin Young
Try for $0.00

Baseball's Natural is John Theodore's true account of the slick-fielding first baseman who played for the Cubs and the Phillies in the 1940s and became immortalized in baseball lore as the inspiration for Bernard Malamud's The Natural.

Eddie Waitkus grew up in Boston and fought in the Pacific theater in World War II. Following the war, Waitkus became one of the most popular players of his era. In 1949, with his career on the rise, his life changed dramatically in a Chicago hotel when a 19-year-old shot him in the chest. Waitkus's dramatic recovery the next year inspired his teammates as the Phillies won the National League pennant. Although Waitkus survived the shooting, he could never outlive it.

“For anyone who loves baseball, Theodore's Baseball's Natural: The Story of Eddie Waitkus is a must read. . . . It has all the elements of a great novel.” ( Chicago Sun-Times)
“Eddie Waitkus, whose ill fortune it was to be the inspiration for Roy Hobbs in Bernard Malamud's The Natural, was both an anomaly and an enigma. . . .Theodore tells his story well.” ( Library Journal)
“Wonderful. . . . Thanks to Theodore's meticulous research and passionate writing, perhaps Waitkus will rise above his footnote status, at least for a time.” ( Booklist)

What listeners say about Baseball's Natural