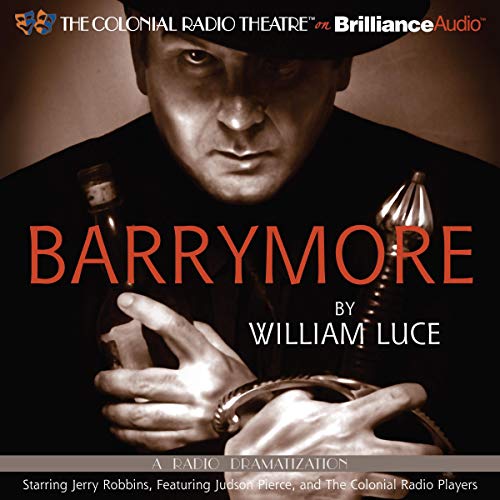 John Barrymore was the black sheep of America’s most illustrious acting family. Celebrated for his charisma and matinee idol looks, he was for awhile America’s most popular actor. Famous for his stage roles in Richard III and Hamlet, he also made more than 50 films. But alcoholism soon dissipated his talents, and he became known more for his Falstaffian behavior and outrageous high jinx than for his art. In Barrymore, William Luce has adapted his acclaimed Broadway hit especially for audio in this stunning production.

What listeners say about Barrymore

This radio dramatization by Colonial Radio Theater carries the listener back to a time of big stars and grand living. Barrymore was a talented and funny person and all this comes through in this piece. Many of the lines are fabulously funny and executed perfectly. I have listened to Barrymore many times and like a fine bottle of wine it gets better with age. The music and sound effects draw you onto the stage to experience the great Barrymore. Colonial Radio Theater programs always provide great entertainment. Keep up the great work!!