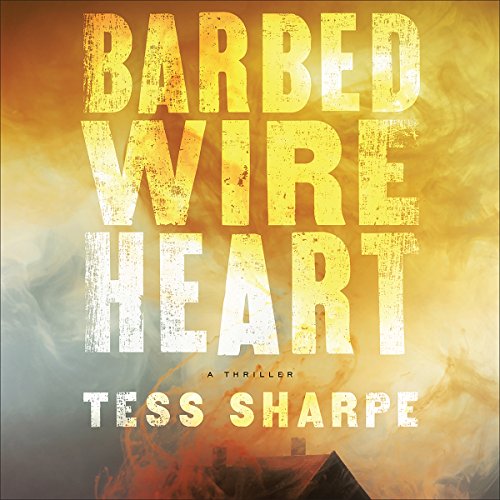 From powerful new voice in suspense fiction comes the unforgettable story of a young woman facing the most difficult choice of her life: family loyalty, or freedom. Set in an evocative rural landscape à la Hillbilly Elegy and with sharp insight reminiscent of Daniel Woodrell (Winter's Bone), Wiley Cash (A Land More Kind than Home), Karen Dionne (The Marsh King's Daughter) or Lisa Wingate (Before We Were Yours), Tess Sharpe's debut Barbed Wire Heart is a breathtaking "ballad of survival sung by a voice you'll never forget" (David Joy).

Guns are meant to be shot - keep them loaded.

Family is everything - betray them and die.

Harley McKenna is the only child of North County's biggest criminal. Duke McKenna's run more guns, cooked more meth, and killed more men than anyone around. Harley's been working for him since she was 16 - collecting debts, sweet-talking her way out of trouble, and dreading the day he'd deem her ready to rule the rural drug empire he's built.

Her time's run out. The Springfields, her family's biggest rivals, are moving in. Years ago, they were responsible for her mother's death, and now they're coming for Duke's only weak spot: his daughter.

With a bloody turf war threatening to consume North County, Harley is forced to confront the truth: that her father's violent world will destroy her. Duke's raised her to be deadly - he never counted on her being disloyal. But if Harley wants to survive and protect the people she loves, she's got to take out Duke's operation and the Springfields.

Blowing up meth labs is dangerous business, and getting caught will be the end of her, but Harley has one advantage: She is her father's daughter. And McKennas always win.

A remarkable novel with a deep emotional core, Barbed Wire Heart seamlessly blends thrilling suspense with a multilayered and unflinching portrayal of a poor, rural community where family is everything.

"Barbed Wire Heart is balanced on a knifepoint, a novel teetering between hope and fate, loyalty and betrayal. With a story of family and a narrator wrought hard as iron, Tess Sharpe has written a ballad of survival sung by a voice you'll never forget." (David Joy, best-selling author of Where All Light Tends to Go)

"Harley McKenna is a young woman raised in a harsh world of meth and madness, a lone girl with a conscience raised by a lawless daddy. I love Tess Sharpe's clean-boned writing and tension that makes my heart gallop. Add the underdog fighting against heroic odds, and a universal cause that hits home, and I'm hooked. I am a fan!" (Leah Weiss, best-selling author of If The Creek Don't Rise)

"A pulsepounding thriller...masterfully written and constructed.... With her powerful debut, Sharpe is definitely a name to watch." (Booklist, Starred Review)

"A terrific novel of suspense, heartbreak, morality and family. Harley McKenna is a remarkable character. The pages will turn themselves and stay with you for a long time." (David Baldacci, number-one New York Times best-selling author of End Game)

From the voice and mind of Tess Sharpe comes a Tour de Force of a MERICAN saga. it appears the wild West is still very much alive in the early life of Harley McKenna in the form of drug-running and meth labs but gets tamed down significantly and all for the better by a mere slip of a girl , which is her disguise 4 what's inside, a bobcat mixed with a fox. Don't try to figure out how she's going to do it. She's way too smart for you and me. I just love books that aren't predictable.

Whiplash for no reason

I thought this would be a good title to read based out of the summary..... I was mistaken. The story was there but the constant going back and forth in time had me so confused. If it would have stayed present tense it would have been a decent read.