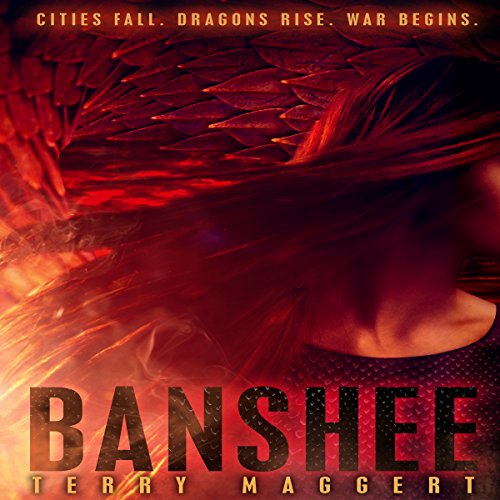 By: Terry Maggert
Narrated by: Henry McNulty
Try for $0.00

The war for earth began in Hell. After earthquakes, plague and floods, the creatures of our nightmares boiled forth to sweep across the planet in a wave of death.On the run and unprepared, mankind is not alone. We have dragon allies, awakened by the attacks and ready to fight.

Emerging from ancient hiding places, the dragons strike back at legions of demons that attack on the night of every new moon. The Killing Moon is the proving ground for warriors of skill and heart, but there are too few left with each passing battle.

Among the riders is Saavin, a brave young woman from the shattered remains of Texas. Her dragon, Banshee, is swift and fearless, but they'll need help to defend the last human city.

With the skills of a warrior named French, Banshee and Saavin will launch a desperate defense against the legions of hell.

They have demons. We have dragons.

Join the fight, and fly to victory with Banshee.

What listeners say about Banshee

I must not have been the correct audience...

I tried very hard to like this book. But, ultimately, it did not speak to me at all. I didn't connect with any of the characters (there are too many of them and their names are strange and there really isn't much difference between them other than A is a bad guy and B is a good guy and C is apparently female). I say apparently because there is no content/description that would lead a reader to know which characters are female (other than, of course, being told that they are).

The concept was interesting - I liked the origins of the dragons, and what they're up against. And it was believable how humankind united (or not) to defeat the demons, and what would happen within the communities, etc. So the problem was not with the world building as much as it was with the... language...

People don't walk downhill in this book, they "follow a declination". People don't look like they're sorry, they look "suitably reproved"... and the actions are written like this: they "deposited a voluminous woven basket filled with guts that were well on their way to unbearable fragrancy given the relentless heat"

It could be that I'm used to reading to-the-point/action novels where, if someone is dumping a stinking rotten bag of guts at my feet, that's how I want to see it written.

It could also be that I didn't like the narrator. His pacing was cumbersome and there was little differentiation between the characters. Some sections were narrated in such a slow methodical pace that I think it hurt any tension-building the author was aiming for. There is no swearing, sex or gore.

Holy freaking crap this book went way too quick. I was almost immediately sucked in and lost all sense of time. I hope there is a second book at least being planned if not in work. You'd best get to it Maggert! Chop chop man.

A different spin on Post-Apocalyptic Books

The narration for this is interesting. I won't say bad because I've heard bad narration before. But the performance was great at times and left something to be wanted at others. Henry McNulty has a deep and harrowing voice which works for parts of this, but for others, it just felt too deep and dark. The production quality was great, though. I didn't notice any issues.

When I first saw this book, I had my doubts. I'm not a huge fantasy fan. Honestly, I usually dislike it (other than player Elder Scrolls, and even then I barely use magic). When I was reading the description of the book, I had one thought. This is different. Different can be good, and different can be really bad. But, Banshee was kind of in the middle.

Sure, this is a post-apocalyptic book. But it's also a fantasy book with dragons in it. And not "these things were mutated from x-and-y" dragons. But real, "I must believe in you" dragons. My inner voice had a really hard time with this. But, if you enjoy that sort of thing then this review is not for you, but I'd bet this book is.

As a post-apocalyptic book, it was pretty good. I would give it a 4 out of 5 just based solely on that. As a fantasy book, I don't even know how to rate it. It's just not my genre.

Maggert's style of writing is real... proper. It made this book feel a little long winded at times. But overall, the dark and ominous tone mixed with the language used left me wanting a little more. Readers who are looking for "real" post-apocalyptic descriptions and reactions will be a little disappointed.

I'm not usually one to point out the shortcomings of novels, but I just had to warn people that are looking at this from a purely P-A standpoint, you might want to move on. If you enjoy dragons and post-apocalyptic novels, then this book is definitely for you.

I received this book for free. This does not affect my opinion of the book or the content of my review.

If you enjoyed this review, please vote for it! If you want to see more like it you can check out BriansBookBlog DOT com. Thanks!

I read Banshee and jumped at the chance to hear it on audible. The narrator is amzing. His rich voice jumps from masculine to feminine, accent to accent, seamlessly.

Human ,Demons and Dragons ,Oh My!

What was one of the most memorable moments of Banshee?

The Death of the oldest Dragon.She faught with honor.
When French Heavener & Saavin were in the cave the Demons dwell and come out of.
I loved the Monks reply to the ignorant townspeople who thought the Dragons were bad and the intelligence of the Dragons.

Have you listened to any of Henry McNulty’s other performances before? How does this one compare?

Not that I remember. But to be fair I am more about the Author and the story.I don't keep track of Narrators unless they are bad or drowned out the reading with the irritating loud sound effects.

It opened my mind to ponder this world he created so well.I think Terry Maggert is brilliant! This was the first story I trad of his.

Terry Maggert is brilliant to write such a wonderful book.It was long and very fanciful in a way of warrior's and the lands that he paints for you as well as the history of the dragons.He created demons and hell creatures that Satan would be happy to claim as his own. It makes you want to dwell in this world he created just a little longer. This starts as a bit of a documentary or history lesson but is not boring. He opens the depth of the imagination and the plausibility of this world, where humans ride on the backs of the great dragons to fight and defend humankind for the depths of hell spawn trying to destroy the world. We meet French Heavener who is a great and brilliant leader and noblemen.He coordinates the ground troops and dragon warrior's like Saavin and her benevolent dragon Banshee to inflict the most damage to the enemy, the army of demons.This takes place 60 yrs after the apparent's of the first dragons.They are wise and fearless fighters that have awoken their deep sleep to save humankind and fight side by side with them to triumph over evil.Although they had been asleep for hundreds of thousands of years, the Dragons were aware of the history of man. They were able to clarify what the people have forgotten about history. One of the best parts of the book I loved was the Philosophical conversations the dragon had with the old Monks.It was funny to me the way both the Monks and Dragon handled the ignorant townspeople that had seen the dragon fly in and had planned on killing the beast because they were under the belief that dragons were evil.This took place shortly after the dragons first arrived. Another part of the story I really liked was where French had taken Saavin to explore the cave the hell beast came out of. to The creatures Mr. Maggert describes are just amazing. This whole world he created is AMAZING. Well written characters and the landscape he paints, wow.

loved this book... it was a bit hard to get going on it. however after perhaps 15 to 20% the story started tying in. the narrator performance was ingenious

I applaud Maggert for doing something unexpected

As you may know post-apocalyptic audiobooks with or without zombies, but especially with, are all the rage or maybe they are just getting more coverage these days. Terry Maggert has decided to jump in the flow of the raging river of destruction of the earth and human perseverance. Yet he was able to spin it in a way that I have not seen before. No zombies. Instead dragons and demons. Sounds so exciting right!

Demons rise from the bowels of hell destroying all that humanity has built. Then, as if that wasn’t enough, dragons rise from their hiding places to help defend humanity. We are told various eye witness accounts in documentary style throughout the story. Giving a great insight into the war that ensued that the characters along would not have given us. While it was fascinating that Maggert ventured into the biology of the life that was left in the world, I found it tedious at times. Even though I loved that idea of what life became.

Even though it has been a long long time since I read anything from the world of Pernn, a place that Maggert obviously has a more recent experience with. He was able to pay homage to the classic while creating something of his own. Because in its simplest form here we have the Dragon Rides of Pernn fighting hell on earth.

I applaud Maggert for doing something unexpected and unusual while keep some basic familiarity. If you have become board with all of the similar apocalyptic stories out there, Banshee could be quite refreshing to you. If all you want is a dark fantasy, you will find that here as well.

This was my first time listening to Henry McNulty. He has a very deep voice and a fast speaking pace. I found it difficult at times to follow what he was saying because of the speed that he was going. Do you know what I mean when I say that certain narrators connect with the listeners? Well, unfortunately McNulty and I did not connect. When I do not connect to a narrator, my mind wonders and my attention fades. However, he has some great characterizations that really helped immerse me into the fantastical world that Maggert created.