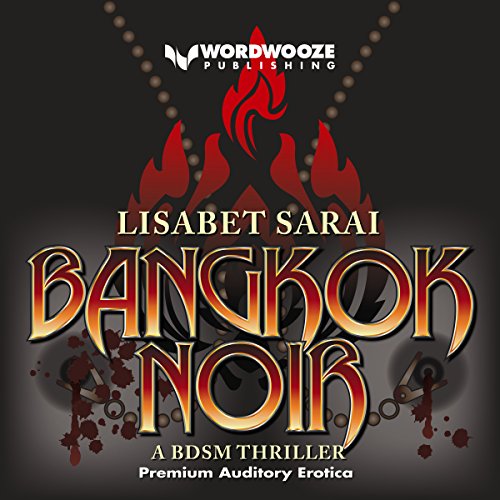 By: Lisabet Sarai
Narrated by: Jazmin Kensington
Try for $0.00

Diana Fanning, aka the Professor, runs The Academy, the only genuine BDSM bar in Bangkok. She's the first person police colonel Apichat Weeranwongsakul consults when a bar girl turns up brutally murdered, tightly bound, with clamped nipples and every orifice stuffed with sex toys. The colonel figures the killer might be one of her customers. But he has his own secrets. He needs Diana to satisfy his shameful dreams of being beaten and abused. Meanwhile, a mysterious American named Sam stalks Nok, the lovely natural dominant who is the Professor's star performer. Nok is used to being the one in charge. She can't understand why she craves the discipline Sam administers.

As more women are slaughtered, always in kinky circumstances, the Professor finds herself in an exclusive world catering to the perversions of Bangkok's wealthy and well-connected. Simultaneously looking for evidence and satisfying her own lusts, she doesn't realize until too late that the power she's used to wielding won't save her from becoming the serial murderer's next victim.

What listeners say about Bangkok Noir

A most original thriller!

One of the most original books I have encountered in quite some time, Bangkok Noir is a story that I felt was somewhat unbalanced in its straddling of genres, but well-told, and exquisitely detailed. Lisabet Sarai captures the essence of the Bangkok experience beautifully, delivering on the language quirks and cultural nuances that really serve to orient the reader in the world of Diana and her girls.

Let me address that straddling of genres first. This is a story comprised of erotica, murder mystery, and thriller, with the erotica looming large over the narrative, but with the murder mystery dominating the reader's thoughts. I actually expected more of the murder mystery, given the gruesomeness of the killings and the way they serve to bring all the characters together, but it remains in the background for much of the story. As for the erotica element, it (no pun intended) dominates the story, with several relationships, dominant figures of different genders, and as much pain as pleasure. It is there where Diana - the Professor - really comes into her own, although she is a caring woman and a smart businesswoman outside the dungeon.

As for the plot, it is somewhat serpentine, winding through different subplots along the way. Sarai does a fantastic job of maintaining the suspense, giving us just enough clue to suspect several different people of being the killer, yet never makes us feel cheated as the truth is revealed. The subplot involving the offer to buy Diana's bar, and the exploration of just how dark the upper class can be, is fascinating as well, introducing even more suspicions.

While I am sure the culture would have come across well in the reading, listening to Bangkok Noir as an audiobook really brings Bangkok to life. I struggled with it a bit as first, but once I settled in, it really worked for me, Jazmin Kensington does an amazing job of capturing the different voices and nailing the different accents, even varying the speed with which each character talks.

Not my usual listen

What a story. Like it says this is a thriller. It kept me on the edge of my seat the entire time. Full of sexy parts and mystery what's not to love. Jasmine does an amazing job giving life to both heroines.

A thrillng read you won't forget

I loved this book! This book is very well written and an absolute delight to listen to. The narrator had the right kind of voice for this book. It's more of a thriller than an erotica but I didn't mind. I loved the descriptions and the sex scenes. I found Thai references a little disconcerting and the ending of the story a little abrupt.
I definitely want to read more from this author and the narrator.

Would you recommend Bangkok Noir to your friends? Why or why not?

I would recommend it to some friends, those who like more of the thriller books.

I like the voice... but found it was sometimes a bit over the top performance-wise for me.

Do you think Bangkok Noir needs a follow-up book? Why or why not?

Yes.. it would be good to find out what happens!

The story was well written, and the pacing was just right. I thought the world the writer has created was very believable. I don't know much about Thai culture, but it sounded like the writer did. I truly felt like I was in that country, with just enough Thai words intermingled throughout the story and with many references to and explanations of the Thai culture to be entertaining. To me, it helped with the roundedness of the story. I felt immersed in the world.

The narrator has a pleasant voice to listen to. I wasn't too happy with the Thai accent of the girl Nok. I understand it was necessary, but that got on my nerve a little bit. The sex scenes were pleasant to listen to. There was one scene where you heard a girl moaning during a whipping, and I found that...arousing. The narrator voiced the different characters very well, especially the men were very well done.

The thriller aspect of the book was good too. I guessed who the perpetrator was pretty early, which is rare for me, but I liked how his murders weren't described too graphically.

I would definitely recommend this book to everyone. It is well-written, well-narrated and arousing. Apart from the ending, there isn't much more I could ask for. Just go ahead and listen to it yourself.

This is one of those stories that stands out from the rest. A thrilling plot, compelling characters, fascinating setting, and outstanding narration all combine to make this a book that I didn't want to leave for a second until the end. My only complaint is that it ends with a cliffhanger and now I need to know the rest of the story.

Kinky sex at its best

This has a great storyline with lots and lots of kinky sex scenes. I liked the variety of kinks with both tops and bottoms. Good characters. Great narration.