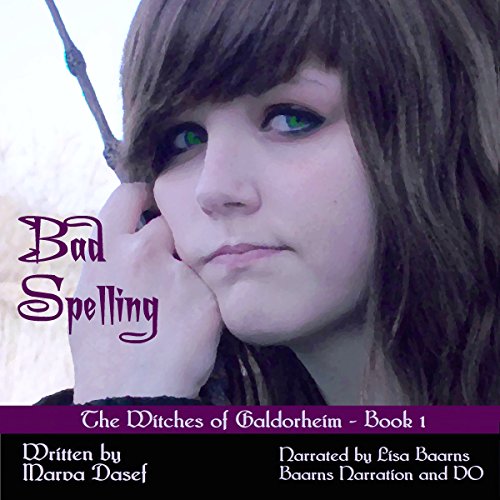 A klutzy witch, a shaman's curse, a quest to save her family.

Can Kat find her magic in time? If you’re a witch living on a remote arctic island, and the entire island runs on magic, lacking magical skills is not just an inconvenience, it can be a matter of life and death – or, at least, a darn good reason to run away from home. Katrina’s spells don’t just fizzle; they backfire with spectacular results, oftentimes involving green goo. A failure as a witch, Kat decides to run away and find her dead father’s non-magical family. But before she can, she stumbles onto why her magic is out of whack: a curse from a Siberian shaman. The young witch, accompanied by her half-vampire brother, must travel to the Hall of the Mountain King and the farthest reaches of Siberia to regain her magic, dodging attacks by the shaman along the way.

What listeners say about Bad Spelling

A great start to a coming-of-age story

Would you consider the audio edition of Bad Spelling to be better than the print version?

There is a great match here. The cover picture is the protagonist, and the voice in the audio version is the same voice I heard in my head when reading the story.

Kind of a toss-up between Kat and her brother, Rune, but I have to go with Kat. She's no super-hero, but she does what needs to be done. She's on a journey of discovery - unsure of her goal, unsure of her own abilities, not even sure of what she's trying to find, but determined to get there no matter what. Most importantly, she's not relying on anybody else to make it easy for her. Nice to see a YA adventure where the heroine isn't depending on some plot-twisting 'hot guy" to rescue her and make everything all better, and who's little brother isn't either an annoyance who needs to be repeatedly rescued or some sort of "out-of-left-field" solution to the problem. Rune loves his sister (admit it or not), he's a smart-ass and a real pain sometimes, but he's got her back. The two of them make a great team.

Like I said earlier, Ms. Baarns voice matches the voice I heard in my head when first I read the story. For me, that's as good as it gets.

Want to be a witch? it's gonna cost you!

If you could sum up Bad Spelling in three words, what would they be?

Would you be willing to try another book from Marva Dasef? Why or why not?

I would love to read another Marva Dasef book! Bad Spellng was delightful--great combination of intriguing story, teen angst and vitality, mystery, and humorous situations.

What does Lisa Baarns bring to the story that you wouldn’t experience if you just read the book?

Lisa Baarns did a great job of differentiuaiting characters. She had good voice moulation and seemed to really "be" her characters, especially Kat.

Fun tale for tweens and above

I would definitely recommend this book to any of my friends who enjoy YA fantasy tales. This is a true charmer.

Rather than picking one particular character, I wanted to mention that Baarns does an excellent job of making the characters distinct and different in voice, without bumping me out of the story.I only gave four stars because at first her voice made it a little difficult for me to get into the story--for about five minutes. But after that it was really good, so it may just be me and the fact that I'd read the story a long time ago, so may have had a "voice in my head" to begin with.

I've read a couple of The Witches of Goldenheim books and look forward to listening to them as well. Fun stuff!

This is a quick, entertaining story about a teenage half-witch who can’t learn to cast spells even though the power in her is strong. Discovering the route of her problem and finding a solution to it leads Kat and her half-brother Rune on a lively adventure. The narrator of the audiobook fit the story well and was easy to listen to. With witches, vampires, trolls, shaman and amusing word play, this story will surly entertain.

Poor Kat!
A witch living in a magical world, her contribution to society depends on her magical abilities, and she's having some major trouble. She hopes things will change, but her spells are atrocious. What will she do?? She decides to run away, but finds herself in the middle of a mystery involving a shaman, and a curse that's interfering with her magic. Can she regain her magic before it's too late?

What a delightful read! I'm waaaaay older than the intended audience, but I found it fun, magical and entertaining, and I'm excited to listen to the next one in the series. I loved Marva's writing, and the narration was great. Very nicely done!

Where does Bad Spelling rank among all the audiobooks you’ve listened to so far?

2nd or 3rd, maybe even 1st since it's the first in this series.

It's a tossup between Aunt Thordis and Mordita. Conversations between the elder witches are great listening.