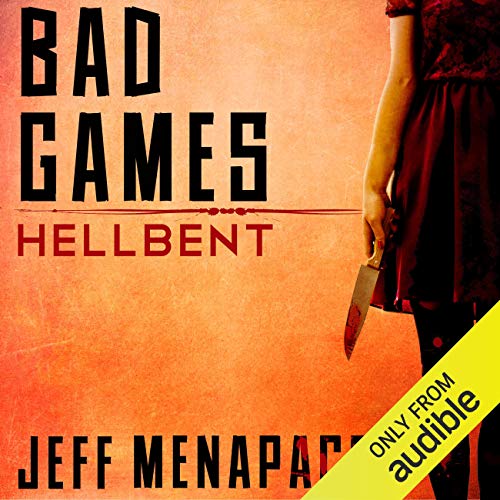 By: Jeff Menapace
Narrated by: Gary Tiedemann
Try for $0.00

Hellbent /adj./ very determined to do something, especially when the results might be bad.

A year has passed. Marine and security specialist Domino Taylor does not work anymore. His days and nights are spent shadowing the Lambert family; the guilt he feels for the tragic events that unfolded in western Pennsylvania haunts him without mercy.

When someone from Domino's past contacts him, she begs him to take on one last job: Find and return her kidnapped son.

Domino agrees to help, not knowing that the truth behind the kidnapping is far more sinister than anything he can possibly fathom.

It appears there is one final game to play. The host is someone who has been planning a masterpiece of epic proportions for some time now, grooming an unwitting Domino as the star, hellbent on watching him suffer before he dies....

This is the gut-wrenching finale in the best-selling Bad Games series. Author Jeff Menapace was a recipient of the 2011 Red Adept Reviews Indie Award for Horror.

"I find the author to be ridiculously talented." (Michelle R, Red Adept Reviews)
"If you're a Richard Laymon fan, check out Bad Games...gritty...very dark...rough around the edges in a refreshing way." (Bill Braddock, author of Brew)

Write them faster and make them longer ! This is the kind of book that I want to stretch out - but end up racing right through. Domino is a badass!

The audiobook version of a thrill ride roller coas

Would you listen to Bad Games: Hellbent - A Dark Psychological Thriller again? Why?

Probably not. It was good, but it takes a lot for me to reread anything.

The narrator was amazing. He really brought the characters to life and made them all individuals.

If you could take any character from Bad Games: Hellbent - A Dark Psychological Thriller out to dinner, who would it be and why?

Domino. I wanna hear about his other adventures

The 3rd book in the Bad Games series! Excellent thriller' something different and exciting! MUST READ IF YOU ARE INTO PSYCHOLOGICAL THRILLERS!!!

Would you consider the audio edition of Bad Games: Hellbent - A Dark Psychological Thriller to be better than the print version?

I havent read the books, but audio are amazing!

What other book might you compare Bad Games: Hellbent - A Dark Psychological Thriller to and why?

Gary is wonderful!!!! One forgets this is just one person!!!!

What does Gary Tiedemann bring to the story that you wouldn’t experience if you just read the book?

The evilness of Monica!!!!

Loved it so much that I am ordering the next book in the series after each one is completed. This author IS Awesome

this series is crafty, sly, scary and gross! these folks are crazy. can't wait to finish it up.

What did you love best about Bad Games: Hellbent - A Dark Psychological Thriller?

AT THE END OF THE TORTURE.
(The way MONICA'S counterpart behaved.)

What other book might you compare Bad Games: Hellbent - A Dark Psychological Thriller to and why?

THE WAY HE VOCALIZED "MONICA'S VOICE.

LOVED THE SERIES, HOWEVER, THOUGHT THE FIRST TWO BOOKS WERE THE BEST!!!

I bought the first book of this series because it was on sale, but man did I absolutely love it! This quickly became my absolute favorite series! So many twists and unexpected events! This series is a must read!

The conclusion to the Bad Games saga was absolutely amazing!! The unexpected happenings made this a story that was impossible to pause...action from start to finish!!

Good trilogy! Keep my attention most of the time.

Which character – as performed by Gary Tiedemann – was your favorite?

I really like Gary Tiedemann's narration and his character voices.

Spoiler: I really enjoyed most of this book. The torture of Ben and Domino got old and seemed way too much -dragging on; especially the drugging hallucinations. Otherwise, I was pleased.