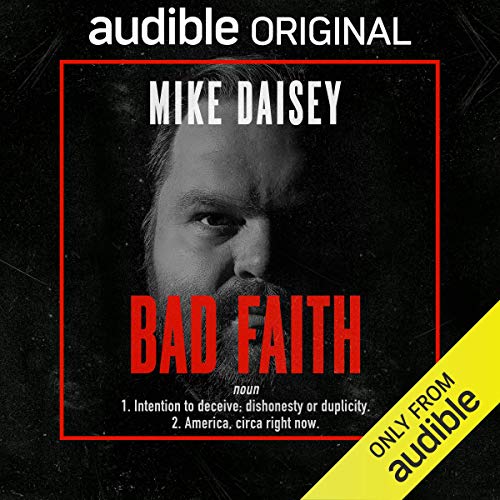 Mike Daisey (Writer and Performer) who has been called "the master storyteller" and "one of the finest solo performers of his generation" by The New York Times, is the preeminent monologist in the American theater today. He has toured for two decades across five continents, ranging from remote islands in the South Pacific to the Sydney Opera House to abandoned theaters in post-Communist Tajikistan to Broadway. Over dozens of monologues he has reinvented the form, from his critically acclaimed 29-night live theatrical novel, All the Faces of the Moon, a forty hour performance staged at the Public Theater, to The Last Cargo Cult, where he gave away his entire fee every night as part of a performance on the economic collapse, to his eternally evolving series All Stories Are Fiction which he has been creating and performing since 2004.
As a playwright, his transcript of The Agony and the Ecstasy of Steve Jobs was downloaded over 100,000 times in its first week. Under a revolutionary open license it has seen hundreds of productions around the world, been translated into six languages, and years later there are productions being staged every night from in Germany to Sao Paolo to mainland China. His prescient monologue The Trump Card predicted Trump’s rise to power and was staged by over thirty theater companies across America as a national piece of political theater, and performed by Daisey himself on an eighteen city whistlestop tour that culminated in him bringing the show to Broadway.
He’s been a guest on Real Time with Bill Maher, the Late Show with David Letterman, as well as a commentator and contributor to The New York Times, The Guardian, Harper’s Magazine, Newsweek, WIRED, Vanity Fair, Slate, Salon, NPR, and the BBC. In a brief, meteoric career with This American Life the two full episodes dedicated to his work are among the most listened to and argued about in that program’s history. He is the only storyteller in America who was written into another playwright’s play as a central character, for which he then won an Obie by proxy. He has also been nominated for the Outer Critics Circle Award, two Drama League Awards, and is the recipient of the Bay Area Critics Circle Award, six Seattle Times Footlight Awards, the Sloan Foundation’s Galileo Prize, and a MacDowell Fellowship.
He is currently performing A People’s History, a show that covers all of Howard Zinn’s A People’s History of the United States mixed against the US history textbook he was taught from at sixteen. It is a twenty-eight hour show performed in eighteen chapters, covering five hundred and twenty eight years of American history. You can listen to his podcast All Stories Are Fiction where you can hear many more of his stories.
Drama & Plays United States
Show more Show less
ORIGINALS

We’re raising the bar on audio entertainment with these original listens produced in the Audible studios.
+More
ON STAGE

Be there when electrifying performers and storytellers take the stage in limited-run and one-night-only productions.
THEATER

What listeners say about Bad Faith

This is what happens when you try too hard. While trying, he finds it necessary to drop F-bombs and other curse words all over the place, which makes me think he might be weak minded, or lazy. While whining about his divorce, life, and politics, he tries to be funny but, falls short. He tries to be charming and again, fell short. All in all, not worth listening to.

It would be too easy to turn the whole gaslighting theme on him, but it’s more a question of a cemented ideological worldview.

Don’t agree with his perception of the truth . Will return this if possible because I didn’t want a republican trash session

Ironically, Bad Faith appears to be presented in bad faith. The fundamental issue in Mike Daisey's case, to be charitable, would appear to be a shortage of introspection.

I need to listen to this monologue on repeat and share with everyone I know.

this was the dumbest thing I have ever heard. I dont like people ragging on other people, places or things.

Could be said about most politicians

Trump certainly is not perfect and his communication style leaves much to be desired.

Obama was purely narcissistic and an amateur at best.

George W Bush couldn’t find weapons of mass distraction with a flashlight and a map.

Bill Clinton couldn’t find a lady he didn’t want to be with and was too busy golfing to take out Osama Bin Laden when he had the chance.

So where does this rant finally end? We all have people that we don’t like especially those of the other party to our way of thinking. And if we want to talk about racism let’s talk about Michelle Obama. She is one of the most highly profiled racists in the United States. Let’s leave profane rants like this out of Audible’s selections.

I found much of this content relatable (no matter how unfortunate that may be) and Mike Daisy delivers it in way that is thought and sometimes laugh provoking. All the best of luck in his career as he obviously deserves it.

I loved his explanation of “gaslighting.” A very entertaining and enlightening listen. I’m looking forward to listening to it again.

timely and most of all straight from the heart

Expected, well, bad faith but got something

timely and most of all straight from the heart. tears of anguish and joy that are somehow joined into tears of resolution. looking for more

Daisey is an underrated talent

Mike Daisey, who brought us 21 Dog Years and the epic Agony and Ecstasy of Steve Jobs (no matter what silly details TAL sandbagged him with unfairly) delivers another tour de force from his extensive portfolio. Daisey is great to listen to, honest, and brave. Imperfectly exquisite. "The art of tomorrow shall be underground" - Duchamp... More, please.