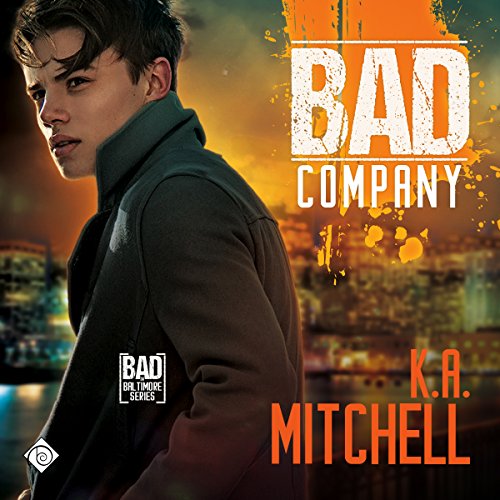 Some things are sweeter than revenge.

“I need a boyfriend.”

Hearing those words from his very straight, very ex-best friend doesn’t put Nate in a helpful mood. Not only did Kellan Brooks’s father destroy Nate’s family in his quest for power, but Kellan broke Nate’s heart back in high school. Nate thought he could trust his best friend with the revelation that he might be gay, only to find out he was horribly wrong and become the laughingstock of the whole school. Kellan must be truly desperate if he’s turning to Nate now.

Kellan’s through letting his father run his life, and he wants to make the man pay for cutting him off. What better way to stick it to the bigot than to come out as gay himself—especially with the son of the very man his father crushed on his quest for money and power. Kellan can’t blame Nate for wanting nothing to do with him, though. Kellan will have to convince him to play along, but it’s even harder to convince himself that the heat between them is only an act....

An old favourite, now in audio!

I have owned this book since it came out the first time, back in 2012 and I have re-read it at least 4 times since then. It remains one of my favourite GFy novels, where the GFY is actually done right.

I love Mitchell's characters. They are real and flawed and, a lot of the time, kind of jerks. Nate is a case in point. He is so incredibly annoying that you kind of want to slap him. And yet, I can't help loving him. Kellan is a brat. He is manipulative and spoiled and yet, he is also sweet and so charming, that he wins you over.
I love how Mitchell is all about show instead of tell. This may be the number one reason why I have read almost everyone of her books several times.

The story may be a bit unbelievable, but it is funny and sexy and GFY/ straight guy virgins are my guilty pleasure. Mitchell can write sex like nobody else and the tension she can create between characters is smoking hot!

Highly recommend this and every other book in the series. I truly hope that the remainder of the series will be out in audio too soon! The narrator was new to me, but he did a fine job of narrating the story.

Narration: Chet Daniel seems to be new to the scene and only has a few books in audible. That’s just a sin as far as I’m concerned. I loved his voice. I was able to get right into the story and enjoy the listen.

Story: So not only was Chet new to me, but so was K.A. Mitchell. I have a few of her books on my kindle—including this series—but never the time to get to them! So this was perfect. I liked the story, even though I’m not a huge fan of gay-for-you stories. If done well, they are really good but finding those can be hard. This was a good one, though. Serial dater asking an old frenemy to help make his dad pissed pretending to be gay. Not a new idea by far, but I liked it anyway. And to be fair, I’m late to the game since the ebook was released…ummm…2011 lol!

The characters…Nate tries to put up a good fight to keep his feelings in check, he really does. But Kellan just bullies his way in there and doesn’t let go. There are some really good laughs in this book. In fact, the blurb warns you not to drink while reading, and I have to agree. It was cute, funny, sexy, and entertaining for me. I liked the way the author was able to make them completely self-centered but likable as well. But we get to see the personal growth from both of them and how the two work each other into their lives.

There is some subplot going on as well between the characters’ fathers get we get a little of. That could have been fleshed out a bit more, I thought, but it was a good subplot. Overall it was a good listen for me.

I really loved the writing and storyline for this book. It was fantastic. Definitely a book I will pull out to re-read and re-listen to over again, which is kind of crazy, liking a book so much you want to re-read it when you don’t even really like the characters themselves. I just wasn’t all that impressed their personalities and how they acted even though they grew on me after time. But that said, this book really worked for me overall.

This was especially fun to listen to in audio. I kept finding myself laughing out loud with some of the ridiculous things these main characters and their friends did. I would highly recommend everyone give this one a chance, and I cannot wait to see what happens in the next book of this series.

Kellan is kind of a selfish, self-involved “completely straight” jerk for the beginning portion of the book. I really didn’t like watching him walk over Nate, knowing how Nate felt about him. All just to get revenge on his dad for kicking him out. Kellen’s hare-brained scheme to “be gay” to rile his dad up was a really bad decision at first, but he does actually evolve as a person throughout this book and it was nice to see that happen as time went on.

If Kellan was selfish, then Nate was a little self-righteous. Nate was always right and everything had to be done his way or he wasn’t happy with it. He also didn’t really seem happy with the way his life has turned out at all, so I think the dynamic between the two worked out for the best. They didn’t really like each other all that much, but in the end with the help of their friends they totally made it work. And when they got together it made for some steamy scenes to read and hear about.

Audio - my first, but won’t be the last time listening to this narrator, Chet Daniels. He made this book even more entertaining to listen to than just reading it. He did a great job with the voices for all of the characters in this book and I felt he got all their personalities correct as well. I look forward to other books from him in the future.

This was originally published in 2011 and I feel even though that’s only 7 years ago, it does “date” this. There’s something about the extreme closeted/denial nature of this story that feels “older” than the books I’m reading published more recently. I think there is plenty of “secret” gayness still going on, but how it’s presented here feels more secretive than necessary – but appropriate for the time. If that makes sense.

On the one hand I feel so blessed that our society is opening up more and more to “other” and letting people be whom they are inside – and stories like this remind me of how far we’ve come. Or at least how far it feels we’ve come.

Besides that… this is a GFY, best friends to lovers story with a bit of denial thrown in for good measure. The angst is fairly high, but so is the humor and the chemistry.

I’m not a big fan of either of these guys as characters so I can’t say that I really loved this – I never warmed to Nate – but I can appreciate the ability of KA Mitchell to write “real” people.

I remember liking this the first time I read it the narrator helps to maintain that admiration. He sometimes felt a little “dramatic” but that was slight. In general he was easy to listen to, made the characters feel unique and didn’t distract from the story.

I hope the next is better. I look forward to "reading " it. What will become of Geofflrey's bluster?

Kellen and his dad have a falling out leaving him homeless and penniless. He turns to his once best friend for help both in making his father mad and a place to live until he finds a job. It is hard to like Kellen. He is spoiled, lazy and seems to want a lot form Nate.

Nate has always had a crush on his friend until in highschool Kellan turned on him and made him a laughing stock now he has turned up wanting Nate to play boyfriend for revenge.

The story did have a good premise. I never really connected to either character but with a side character Eli. This book was Ok. It started off slow but did get better. Chet Daniel gave a good narration.
If you like frenemies to lovers, revenge on daddy, fallen from grace, and a fair romance you may like this one.

This series is one of my favorite rereads. I'm so glad it's finally coming out in audio. I cannot wait for the next one!