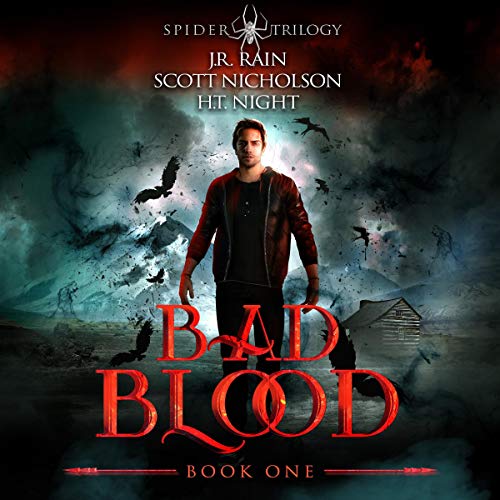 They call him Spider.

And people come to him when they have a problem. So when teenager Parker Cole approaches Spider at night school, he figures she's just another problem waiting to happen. But then she tells him about her father, who runs a cult called Cloudland based at the foot of mystical Mount Shasta, California.

And then she tells Spider about her best friend, who is now dead, her body completely drained of blood. Spider wonders if the death is the work of a fellow vampire...or if he's now the target of a sinister game designed to lure him to Cloudland, where darker mysteries await.

A vampire thriller from three best-selling authors: J. R. Rain of the Vampire for Hire series, H.T. Night of Vampire Love Story, and Scott Nicholson of The Red Church.

" Bad Blood is fast, hilarious, and sexy. Rain, Nicholson, and Night just might have created the coolest vampire since Kiefer Sutherland. The Mount Shasta setting is dreamy. The cult is deliciously creepy. And Spider is as sexy as they come. I was pressing the ereader's 'forward' button so fast that I broke it. Let's hope we hear more from Spider." (H.P. Mallory, number-one best-selling author of Fire Burn and Cauldron Bubble and To Kill A Warlock)

What listeners say about Bad Blood: A Vampire Thriller (The Spider Trilogy Book 1)