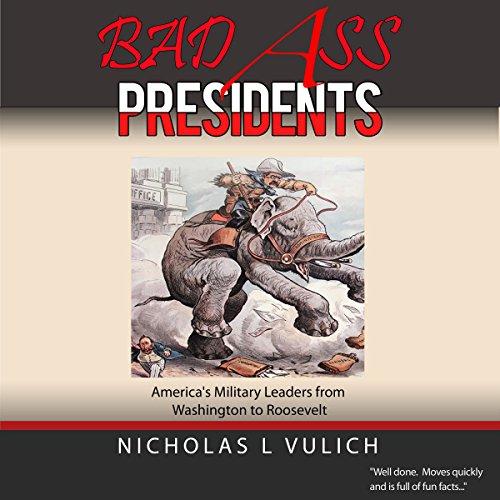 By: Nicholas L. Vulich
Narrated by: Chuck McKibben
Try for $0.00

Ever wanted to know more about the American presidents, but were unsure where to look?

Bad Ass Presidents follows the life of America's warrior presidents. Forget Bush, forget Obama - they're a bunch of pussies compared to these guys.

George Washington rode fearlessly at the head of his troops. During the French and Indian Wars, he had two horses shot from under him, and four bullet holes blasted through his coat. None of that discouraged him.

Andrew Jackson has the dubious honor of being the first president to have an assassination attempt made upon his life. What did the old warrior do? He charged the son-of-a-bitch with his cane and went on with his day.

William Henry Harrison defeated the Indian chief Tecumseh at the Battle of the Thames. At the Battle of Tippecanoe, he had two horses shot from under him and kept fighting.

Zachary Taylor, hero of the War of 1812 and Mexican War, was propelled into office through his military fame. Because of religious beliefs, he refused to be inaugurated on Sunday. As a result, this was the only day in history America had neither a president nor vice-president.

Abraham Lincoln fought in the Black Hawk War; physically tossed an agitator out of the audience at his first political rally; in the Civil War he often visited battlefields, walking here and there, with no regard for the dangers involved.

General Ulysses S. Grant was a hard drinking, rough and tumble fighter who moved from one battle to the next, not stopping to rest in between. Of him all Lincoln could say was, "I can't spare him, he fights."

Each of these bad asses show what a president can be if he doesn't spend his entire day flying a desk, or hiding under it. Listen to the audiobook! Learn about some real American heroes.