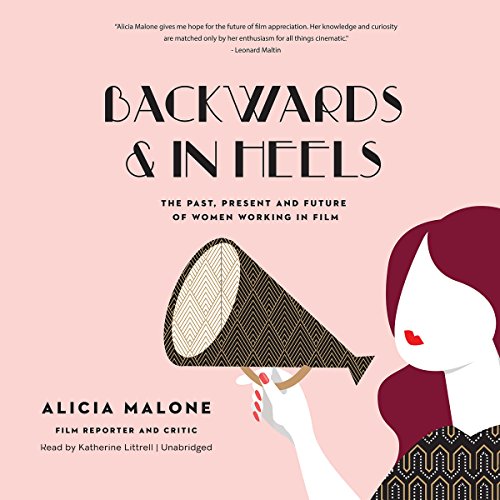 Backwards and in Heels

By: Alicia Malone
Narrated by: Katherine Littrell
Try for $0.00

"After all, Ginger Rogers did everything that Fred Astaire did. She just did it backwards and in high heels." - Ann Richards

Women have been instrumental in the success of American cinema since its very beginning. One of the first people to ever pick up a motion picture camera was a woman, as was the first screenwriter to win two Academy Awards, the inventor of the boom microphone, and the first person to be credited with the title film editor. Throughout the entire history of Hollywood women have been revolutionizing, innovating, and shaping how we make movies. Yet their stories are rarely shared.

This is what film reporter Alicia Malone wants to change. Backwards and in Heels tells the history of women in film in a different way, with stories about incredible ladies who made their mark throughout each era of Hollywood, from the first women directors to iconic movie stars and present-day activists. Each story shares the inspiring accomplishments of women, while also highlighting the obstacles women have had to face.

Backwards and in Heels combines research and exclusive interviews with influential women and men working in Hollywood today, such as Geena Davis, J.J. Abrams, Ava DuVernay, Octavia Spencer, America Ferrera, Paul Feig, and many more, as well as film professors, historians, and experts. Join Alicia as she champions Hollywood women of the past and present, and looks to the future with the hopes of leveling out the playing field.

What listeners say about Backwards and in Heels

This book teaches you so much about film history, not to mention also give you so much more movies to watch that you've probably never seen or heard of

I've long been a fan of Alicia Malone's on TCM so was delighted when I found this book on Audible. This book covers the role of women in film since the start of Hollywood through a combination of biographies and essays. The biographies are entertaining and also include the individuals own words on their role and/or the role of women in film. The essays are well researched and thought provoking. Also worth mentioning is that while Alicia writes about well known aspects of women in film and very famous women in Hollywood she brings to light many aspects and women that are not as well known. She also addresses women in every aspect of Hollywood including executives, directors, cinematographers, actresses, etc. I highly recommend this book for film fans, history fans, and everyone who cares about the roles women play in such a vital art form. The narrator also did an excellent job!

An informative and passionate call to arms!

At Oscars time of 2019, with no female directors nominated, this book is particularly relevant. The work is well researched, enthusiastically presented, thought provoking and of commanding interest to another TCM film geek!

Such amazing history of women in Hollywood. Presented in a way that it was very interesting and engaging. The narrator was wonderful. I learned so much about women's roles in history.

Provoking History of Women in Film

Written by a critic, this is a delightful true view of the troubles women have faced in the film industry. As a woman, it rings true to personal experience and opens up some previously unheard names. From the touchy topics of weight to corsets to abortion the book presents women in a creative light.

Exactly the book I’ve been looking for

As a film scholar I’m constantly looking for new books and unique angles on the history of film and as a feminist I’m always looking for books where I can learn more about bad ass women who paved the way. This book filled both of those roles and more. A really concise read about things I wanted to know about and things I didn’t know I wanted to learn. I have a much longer list of Hollywood women I want to research and learn more about thanks to Alicia. I’d recommend this book to any feminist film nerd.

a wonderful book. eye opening and a terrific look at women and minorities in film. the world is changing, but a little too slowly.