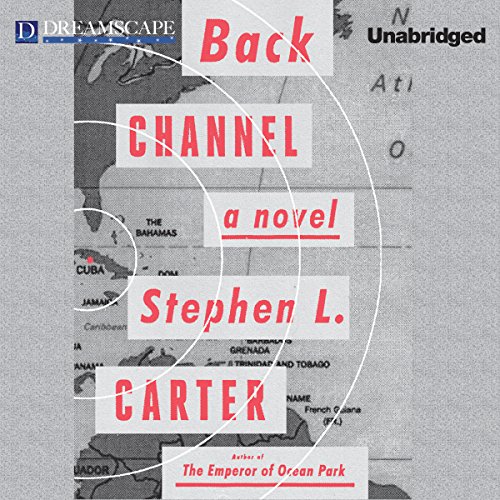 By: Stephen L. Carter
Narrated by: Bahni Turpin
Try for $0.00

October, 1962, in Cuba: Soviet ships off-load what intelligence reveals to be nuclear missiles. In Washington, President Kennedy and his advisers are in furious debate over how long they can wait to discover what the Soviets intend before dropping the first bomb. And, in Ithaca, New York, Margo Jensen - a 19-year-old Cornell sophomore - is swept up in a bizarre concatenation of circumstances that will make of her the back-channel liaison between Soviet Premier Khrushchev and Kennedy. Events unfold too quickly for her even to ask, Why me? But the stunning answer is revealed bit by bit as she is drawn ever more deeply into the crossfire of infighting between governmental agencies; into desperate negotiations to avoid nuclear war; and into the secrets of the extraordinary legacy she inherited from the father she never knew.

Starred review. “Carter renders a fast-paced espionage thriller with tantalizing grains of truth that highlight the general “back channel” in which black Americans have had to operate as citizens for much of the nation’s history.” ( Booklist)
“An atmosphere of nearly oppressive suspense . . . [With] the reader as a fly on the wall...we’re treated to all kinds of spectacles...from Bobby Kennedy clashing with Curtis LeMay to spy vs. spy action in the field...Carter delivers a satisfying historical thriller with some nice cliffhanging moments.” ( Kirkus Reviews)
“[Carter] manages to build suspense around a historical event with a known outcome.” ( Publishers Weekly)

What listeners say about Back Channel

I so rarely rate a novel with 5 stars, but this novel made it an easy decision. The plot is a fictionalized version of the Cuban missile crisis, with the protagonist a 19 year old African American college student (Margo) who is instrumental in the back channel negotiations. I usually get bored with spy thrillers, but the characters in this made it come alive. I liked the historical backdrop, too. I loved this book from start to end. The writing is very good, too. I will definitely check out other books by Stephen Carter. This is a quality novel and a compelling thriller. It was both authentic and fun.

too wordy and long

to much detail and it's dry. I can't force myself to finish! the story is interesting, but it uses too much words to describe something which tend to make the story slow and boring.

A good listen but a convoluted

This is an ambitious thriller book set during the Cuban missile crisis. A real page turner, good suspense too many chapters and twists and turns. Carter has written an over complicated story and the heart of the book is nice but just not credible. A better reader with more accent and language skills would have helped. Kennedy’s voice can easily be imitated but this reader misses entirely.

I enjoyed the narration and loved the length of the book (I hate to waste my subscription on a short book!) but I found the story rather unbelievable.