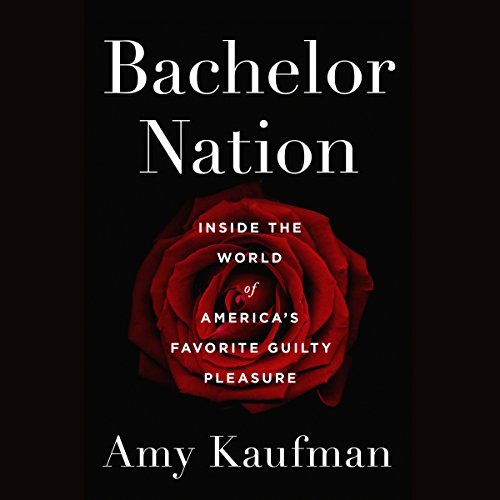 For 15 years and 35 seasons, the Bachelor franchise has been a mainstay in American TV viewers' lives. Since it premiered in 2002, the show's popularity and relevance has only grown - more than eight million viewers tuned in to see the conclusion of the most recent season of The Bachelor.

The iconic reality television show's reach and influence into the cultural zeitgeist is undeniable. Best-selling writers and famous actors live tweet about it. Die-hard fans - dubbed "Bachelor Nation" - come together every week during each season to participate in fantasy leagues and viewing parties.

Bachelor Nation is the first behind-the-scenes, unauthorized look into the reality television phenomenon. Los Angeles Times journalist Amy Kaufman is a proud member of Bachelor Nation and has a long history with the franchise - ABC even banned her from attending show events after her coverage of the program got a little too real for its liking. She has interviewed dozens of producers, contestants, and celebrity fans to give readers never-before-told details of the show's inner workings: what it's like to be trapped in the mansion "bubble"; dark, juicy tales of producer manipulation; and revelations about the alcohol-fueled debauchery that occurs long before the fantasy suite.

Kaufman also explores what our fascination means, culturally: what the show says about the way we view so-called ideal suitors, our subconscious yearning for fairy-tale romance, and how this enduring television show has shaped society's feelings about love, marriage, and feminism by appealing to a marriage plot that's as old as Jane Austen.

What listeners say about Bachelor Nation

As a fan from the beginning (quite literally every season and spinoff) I was so excited to dive into this juicy book. Unfortunately there wasn’t anything juicy about it. Everything she talked about is common knowledge within bachelor nation. She had no inside scoop, no specific examples of anything salacious or manipulative (for example she would say “someone who used to work for the show once told me that producers would edit sound bytes to make the conversation different than it really was.” Well, DUH. I just had such high hopes for this book, but I might as well have just watched any interview with any ex-contestant, because those were the only direct quotes she gave. She had nothing exclusive.
Also, she is a terrible narrator.

Skip it, even if you're a Bachelor fan.

If there wasn't so much added fluff. Clearly she didn't really have much info to share on the show, so she filled it with her own personal story and the history of game shows and dating shows. Boring!!

What was most disappointing about Amy Kaufman’s story?

That most of her information is gathered from other sources. She didn't seem to have much new info to share. It is a compilation of information easily found online. Also, her shortening of words was so irritating. The Bachelor becomes "The Bach" Alcohol is "Alc" It is grating, to say the least and comes across very immature, but I guess that is her audience.

Who would you have cast as narrator instead of Amy Kaufman?

She was okay. I just hated the content more than her voice.

If you could play editor, what scene or scenes would you have cut from Bachelor Nation?

I would have cut the intro that was way too long about her story growing up. Since we don't know her, we don't really care to be held hostage to her childhood stories. I would also leave out the history of every game and dating show. It was waaaaay too long!!

takes too long to get to the "good stuff"

Amy's story is interesting. Amy's voice was a bit too valley girl and more ridiculous when she pretended to have a valley girl voice while making fun of others. I think I would have enjoyed it more if someone else had read it.

The book, like the show, was a guilty pleasure!

The Bachelor and The Bachelorette are shameful, guilty pleasures for me. Anyone who knows me in real life would probably faint dead away if they knew I watched these shows. But I do. As introspective as I am, I’ve never been sure why. I thought this might answer the question of how a feminist can watch this tripe and enjoy it—though I fast forward through all the ridiculous fights the contestants have.

At any rate, Kaufman’s book was a fun, fast read. Though I must say HER reading of the audio book was sometimes a tad too much. Yeah, sarcastic Jews—I’m one too, but she was just a little over the top. Also to read most women with (I’m going to show my age here) valley girl voices was grating. Still, she has a very distinctive voice on the page and I would rather hear her on audio than someone else.

Although not as deep as I was hoping, she does touch on the reasons people watch. Beyond that, it’s definitely an adequate “behind the scenes” look. I say adequate because Kaufman mentions a whole slew of people she wanted to talk to but almost anyone of note declines her interview requests. She’s somewhat on the outside (having been banished from the cadre of inside media folk because her recaps of the show were not nice enough) so the people she does manage to talk to are not always the ones we might want to hear from. But it sounds as if anyone related to the show is threatened within an inch of their lives if they spill any secrets. We learn enough to make this a fun listen that never drags.

I never say, “This is a must read for anyone who…” (in this case, “watches The Bachelor or The Bachelorette”) but it is! I’m a harsh critic. Anyone in the target audience for this book will probably give it 4 or 5 stars. In fact, I should give it 4 stars because I didn’t want to stop listening. Yep, gonna change my rating to 4 stars.

I wasted an audible credit for this ? Why is the author just talking about herself?

Not exactly what I hoped for

I was hoping for more bachelor “secrets” than the book had to offer. I finished the audiobook within 24 hours and the entire time while listening I was thinking “Ok, ok, get to the point and let’s move on to the secrets.” and all of a sudden realized I was already 6 hours deep in Chapter 10 of 13 and still nothing really happened. I’d say the bachelor franchise’s history was a much larger part of the book than revealing anything “inside the world of the bachelor nation”... Which is ok, and I definitely respect the Authors work because you can tell she lived and breathed bachelor nation while researching for this book and even before that, but I just hoped more of my answers about the behind-the-scenes would be answered. I also found it hard to follow at times, with multiple people contributing to the book while everything was read by the same person (the author). I absolutely LOVED the philosophical and psychological aspect the author explored with the support of various experts in the respective fields and really enjoyed delving into some theories or scientifically proven phenomenas that apply to some of the things regarding the show and it’s premise and it’s contestants.

A Must Read for Any Bach Fan

I most liked the parts that drew on interviews with bachelor cast and crew members.

Amy Kaufman's approach to the phenomenon that is The Bachelor is insightful and witty. Kaufman writes about the franchise with the same critical perspective associated with her recaps. In many ways, Kaufman articulates so perfectly what I have struggled to put into words; it is possible to be an intelligent, critical, and feminist woman and enjoy the bachelor. Kaufman has very clearly done a lot of research and conducted a lot of interviews for this book.

Another thing Kaufman does well is put the entire phenomenon into a larger picture. She draws on anthropological and psychological perspectives to make observations on what the show and our need to watch it say about society.

I think what I enjoyed the most about this book was the interviews with many past cast members. Through her interviews the reader gains access to the inner circle of Bachelor Nation, we get to know the people who make the show and star on it a little more. This book really is a must read for anyone who wants to know more about the beloved show.

Horrible read, even worse to listen to

If you’ve ever read even a click-bate “10 things you didn’t know about the Bachelor” article, you won’t hear anything new. Amy mostly summarizes things in other books written by past contestants and they’re probably things you can find on the back of the about section of those books. The worst part is the voices she does to imitate the people she quotes- seriously cringe worthy. Getting through this book on audible was a struggle. She comes off as a bitter and jealous fan who wishes she had been cast on the show. Don’t waste your time.

the background on the bachelor franchise and perspectives from former contestants was good journalism. However, the book may have been better as a series of articles because that's how it reads. I'm sure the author never intended it, but she tends towards mocking other people's accents. she snarkily points out a woman from Maryland slips into a southern drawl even though she's from Maryland. It's not actually that crazy if she knew the area. She also explores the reasons behind why everyone loves the bachelor and dismisses other reasons besides her own which I found a bit silly. Her perspective is important and interesting, but that doesn't mean that everyone is faking their snark and watches it deep down wanting a "fairytale romance" just because she and her friends do. These criticisms aside, it's decent writing, a good story, and she did her research thoroughly. She definitely is a "smart cookie."

I want to say I love the snarky over the top view of the bachelor and how it is put together especially after this current season with Arie.

Fun to listen to. Easy listen.
If you have followed Bachelor Nation for a long time there won’t be too many surprises though, but I might be a tad more obsessive than others.