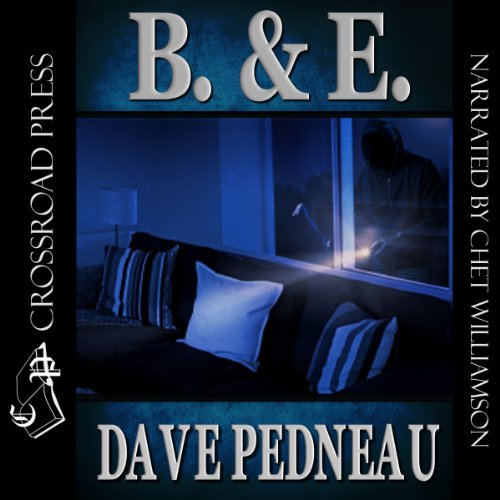 By: Dave Pedneau
Narrated by: Chet Williamson
Free with a 30-day trial

The Incident: An interrupted burglary on a peaceful Milbrook street ends in the stabbing of a citizen and the murder of a cop. And that's only the beginning of a criminal nightmare for special investigator Whit Pynchon.

The Invasion: Whit has good reason to believe that the bloody B. & E. is the latest in a rash of break-ins committed for the same reason: to steal firearms. Even worse, the culprits may be neo-Nazi terrorists, who rove through small towns like Milbrook, committing robberies as part of a larger, more treacherous plan.

The Investigation: Even with the help of his lover, newspaper editor Anna Tyree, Whit has his hands full - with an obnoxious new police chief, a rabble-rousing minister, a pack of eager news hounds and the elusive killer thieves, whose vengeance is set to explode.

What listeners say about B. & E.

Sometimes I could throat punch Anna! Frustrating!! The betrayals from within were disparaging! Greed and so many lives lost!! Action packed and deceit filled. I was sure of one villain early on. The storyline held my interest to the end. I voluntarily listened to a free copy of this and am giving an honest review. The narrator did a great job.

This was great. We listened to the entire story in one day. I have never listened to tis author or narrator. What a pleasant surprise. A book that keeps you listening. You have to find out what is going to happen next. We had to finish the story the day we started it. I will listen to other books in this series and by this author. The narration was perfect for this book. Chet Williamson did an excellent job. I will look for other books narrated by Chet. I received this book in exchange for my honest review.

One of the best whodunits I’ve read in a long time. I think the story was well written with excellent narration and I hope to read more from this author. It’s kind a like good clean fun with a twist I recommend it.

Dave Pedneau is the real deal

I wasn’t sure what to expect from this novel as it’s the first I’ve read by the author. I’m happy to report Pedneau delivers quite the story and I was pulled in almost immediately and had to listen straight through the day today to see how everything resolved. The plot was very well developed and the main characters were flawed and intense and just awesome. There were several twists to the story and a surprise at the end. The narration by Chet Williamson was totally on point as well and really enhanced the story for me. I am fan! I recommend by the book, the author and the narrator!

Break ins, robbery, srealing firearms, are the plot for this good mystery. Good fast past thriller. The narration by Chet was superb, and added a lot to the story, the tension, his voice does well with mysteries.,Given audio for my voluntary review