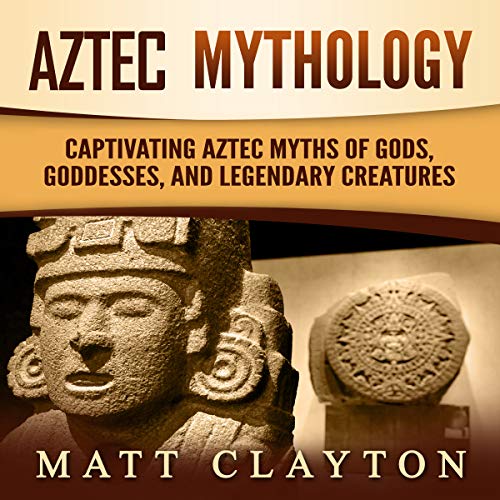 If you're looking for a captivating collection of Aztec myths, then pay attention....

The Aztecs believed offerings of human blood and human lives were necessary to the continued running of the universe. Indeed, in Aztec myths, the gods themselves make sacrifices of their own blood and even of their entire bodies in order to create a universe humans can live in and, in one story, to create humans themselves; humans therefore must make blood sacrifices in turn to feed the gods and to keep the universe in existence.

To the ancient Aztecs, these practices seemed fitting, necessary, and honorable, helping to connect the world of humans to the divine world of the gods, a universe that in Aztec myth took shape in cycles of creation, destruction, and rebirth.

Aztec Mythology: Captivating Aztec Myths of Gods, Goddesses, and Legendary Creatures invites you to go on a startling journey to discover stories such as:

So, if you want a captivating collection of Aztec myths, listen to this audiobook now!

I liked learning more about the myths of my ancestors. This book has some great stories that I will be able to pass down to my kids to keep our heritage alive. I think it’s important to know about our roots and embrace the rich cultural history we have. I’d definitely recommend it for that reason.

The narrator does an absolutely terrible job at pronouncing even some of the most basic Nahuatl words and names. This is painfully obviously read by someone who has no familiarity with our culture and it devastated the delivery of these great stories. This should have been read by someone who has a deep connection to the stories and at least a basic understanding of the language.

In all, I’d recommend it for a listen. Just assume that each and every Nahuatl word is pronounced incorrectly. Really, it would be better if you read it on your own and learned how to pronounce the words properly.

the narrator could not pronounce anything correctly. I wish I could get my money back.

I was excited to find this book in English. I struggled to finish book. Narrator has an excellent voice but pronunciation was not the best. I also tried listening to it in Spanish. The book did not speak to me in either language. It is good for basic understanding but pronunciation of names, things and places in Nahuatl is imperative if one is narrating on either language specially if we are touching on specific methology.

The stories told are up to par with mythological legends of other pantheons such as the ones inhabited by the Norse and Greek gods. The writer did a great job of compiling the legends and myths of the Aztecs. The reader has a nice voice and would be great in almost any other work, but please, please Audible, when doing a work like this, get a reader that can at least phonetically pronounce the names of the subjects of the stories. The bad pronunciation made the listening a lot less enjoyable than what it should've been, and at times almost unbearable.

This is a wonderful book I purchased for my grandson who is 8. it gave understandable stories of the Aztec Gods and the mythical stories that brought them to life. National Geographic did an awesome job on this book.

Easy to follow doesn't go into great depth, so that you get lost. just a really nice book if you just want to hit the high points in mythology. we are really enjoying it

It is interesting and informational

I already knew a lot of this but this book is a fun refresher. It goes through all the gods and the major heroes. Added a lot to the stories.

I looked for a basic Aztec mythology book for what seems like forever now because I was holding out for a book with really good illustrations and I found that in this book. The stories are short and to the point without feeling rushed and the stories are in order.

This is a good audiobook for my children to start them in Aztec Mythology. After listening to it several times though I've had to buy other books for them to go further in depth.

And because I deem this audiobook an accurate and a well-developed one, I’ll be buying the ebook version of it for future references.