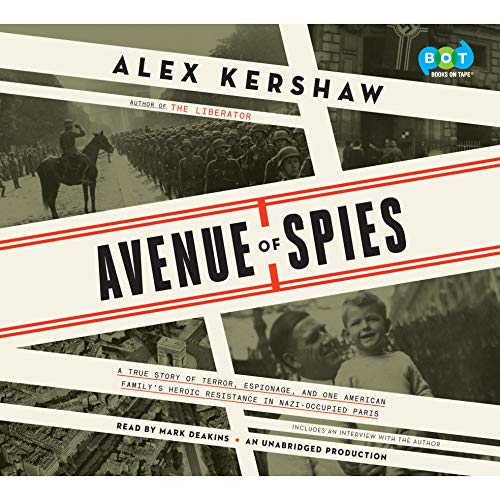 By: Alex Kershaw
Narrated by: Mark Deakins
Try for $0.00

The best-selling author of The Liberator brings to life the incredible true story of an American doctor in Paris, and his heroic espionage efforts during World War II.

The leafy Avenue de Foch, one of the most exclusive residential streets in Nazi-occupied France, was Paris's hotbed of daring spies, murderous secret police, amoral informers, and Vichy collaborators. So when American physician Sumner Jackson, who lived with his wife and young son Phillip at Number 11, found himself drawn into the Liberation network of the French resistance, he knew the stakes were impossibly high. Just down the road at Number 31 was the "mad sadist" Theodor Dannecker, an Eichmann protégé charged with deporting French Jews to concentration camps. And Number 84 housed the Parisian headquarters of the Gestapo, run by the most effective spy hunter in Nazi Germany.

From his office at the American Hospital, itself an epicenter of Allied and Axis intrigue, Jackson smuggled fallen Allied fighter pilots safely out of France, a job complicated by the hospital director's close ties to collaborationist Vichy. After witnessing the brutal round-up of his Jewish friends, Jackson invited Liberation to officially operate out of his home at Number 11 - but the noose soon began to tighten. When his secret life was discovered by his Nazi neighbors, he and his family were forced to undertake a journey into the dark heart of the war-torn continent from which there was little chance of return.

Drawing upon a wealth of primary source material and extensive interviews with Phillip Jackson, Alex Kershaw recreates the City of Light during its darkest days. The untold story of the Jackson family anchors the suspenseful narrative, and Kershaw dazzles listeners with the vivid immediacy of the best spy thrillers. Awash with the tense atmosphere of World War II's Europe, Avenue of Spies introduces us to the brave doctor who risked everything to defy Hitler.

"A spellbinding tale of triumph and tragedy. Intimate and terrifying, Avenue of Spies is impossible to put down. This is Alex Kershaw at his best." (Annie Jacobsen, best-selling author of Operation Paperclip)
" Avenue of Spies delivers a crisp, pulse-pounding narrative. Kershaw recreates the drama and suspense of war-torn occupied Paris. A taut thriller, the book is centered on an intrepid American family and is filled with a cast of unforgettable characters. Avenue of Spies is like sipping a fine wine: sublime!" (Patrick K. O'Donnell, best-selling author of First SEALs: the Untold Story of the Forging of America's Most Elite Unit)

What listeners say about Avenue of Spies

At the risk of sounding too 'Jerry Maguire', Alex Kershaw had me at 'The Bedford Boys' and I've been of huge fan of his ever since! 'Avenue of Spies' tells the story of an American doctor and his family (wife and son) who, living just steps away from the center of Nazi evil in Paris, became part of the French Resistance. The story is told mainly through the eyes of a 16 year old, now an old man, who loved and worshipped his father and all the good that he stood for. It shares some details about their daily life under Nazi occupation, and without giving away too much (no spoilers here!), explains what happened to them as a result of their choice to fight. And something I really liked about this book is that Alex puts their story into context by explaining what was happening in Paris and how the City of Light managed to avoid total destruction. (No Herr Hitler, Paris is NOT burning!!) I listened to the audio version of this book (great narrator!) that included an interview with Alex where he offered some insight as to how this story came to be. If you're interested in World War II history and enjoy reading about ordinary people doing extraordinary things, I highly recommend adding 'Avenue of Spies' to your reading list!

What made the experience of listening to Avenue of Spies the most enjoyable?

Great story that tells what true heroes are made of.

What was one of the most memorable moments of Avenue of Spies?

When the father, Dr. Jackson, refused to possibly save himself and stayed with his patients.

compelling story of an American doctor and family

A well-written and compelling story of an American doctor , his Swiss wife and teenage son who became part of the resistance in occupied France and pay a high price. Each one's individual bravery and selflessness is remarkable. The sadism and evil of the Nazis are well known but continue to be astonishing.

What did you love best about Avenue of Spies?

This was a well written non-fiction cliff hanger that I listened to while drifting off to sleep. I looked forward to going to bed so I could find out what would happen next.

I started listening in bed but finally had to listen during the day because I could not wait to find out how it would end.

Once again truth can be stranger than fiction, especially during the Nazis reign of terror and not just German ones. Highly recommend for any history fan and those with an interest in WWII.

Truly grateful research was done to uncover such a remarkable family who have all.

Don’t hesitate listening to this book. One of the very best WWII books on the French resistance!

I am a fan of Alex Kershaw which makes me all the more confused when he talks about use of MG42 in the capture of France. this is of course historically inaccurate as the gun was not developed until the year 1942. Such a simple mistake forces me to question Alex work...

Very intriguing story of ordinary people doing extraordinary things, risking their lives to do what they didn't have to do.