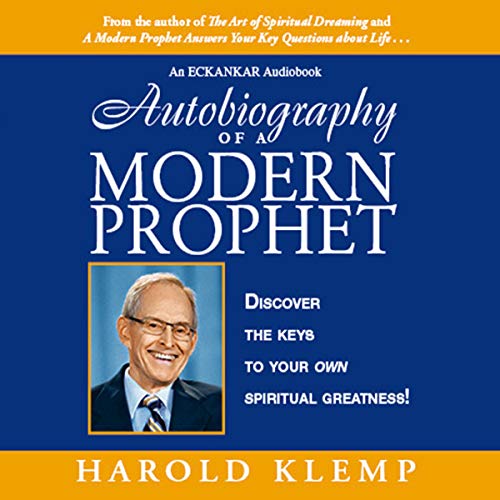 Autobiography of a Modern Prophet

By: Harold Klemp
Narrated by: Rich Miller
Try for $0.00

It's 1970. A dark Wisconsin night. A once-shy farm boy, now in his 20s, stands on a bridge over a river. He's left the farm, studied for the clergy, and done a stint in the air force. He's a proofreader now. He's seen faraway places, but tonight he's in Wisconsin overlooking the dark water. He's about to see the face of God, to become a God-realized man.

From this momentous turning point, Harold Klemp's life would never be the same. His incredible experience that night was simply a prelude to a time of testing, humbling, cleansing, yet blessed experience with the light and sound of God. He would emerge as the spiritual leader and modern-day prophet of Eckankar.

This is his spiritual autobiography. "This book," he says, "is about God-Realization and the myths that surround the highest state of spiritual realization known to mankind. The first and greatest illusion is that once God-Realization is attained, the battle for higher consciousness is forever won. This oversimplifies things....

"The hard part came after God-Realization. Now I had to return to the problems of life and confront them. The specter of God's haunting love was always with me.... It carried me beyond the pleasant cooing of belief and faith, thrusting me into a brilliant world of light shorn of all illusion."

If a shy Wisconsin farm boy can master his spiritual destiny, why can't we?

According to Gallup, 82 percent of those polled in America alone want to experience spiritual growth. Believe it or not, it is your destiny to discover your godlike nature, your spiritual greatness.

"Tucked away in the hidden places of this book are clues as to how you too may reach the glories of God," says Klemp.

"Now come with me on my journey."

"Autobiography of a Modern Prophet by Harold Klemp describes how he left the farm and enrolled in the high-school department of a Lutheran pre-ministerial college. During his senior year in high school - a period when his troubles seemed to weigh heavily on him - he experienced, for the first time, a strong awareness of God’s help. Ten years later, he had a similar experience, but this time it was more direct, engaging, and transforming. Everything changed for him that night when he became a God-realized man; the experience transformed him into a modern-day prophet of God. This memoir follows the author’s spiritual journey as he grows and discovers deeper levels of spiritual consciousness, blessings, and personal transformation. This is a story with manifold lessons for readers and anyone who wants to follow their calling faithfully. An encounter with God, one that turns things around, is brief and short-lived and the real experience comes with the doldrums of everyday life and the trials that come along the way. This book is filled with deep spiritual lessons from the author’s own life, indications of ways God calls us, and insights on how to deal with troubles when they come. Autobiography of a Modern Prophet is filled with spiritual gems for everyone and readers will find both light, love, and encouragement as they read. Most of all, the story is proof that God seeks us where we are and in unexpected ways and moments. It was a soothing experience listening to this audiobook; it is a real gift of faith. Autobiography of a Modern Prophet by Harold Klemp tells the story of the author’s vocation and mission, a story of a powerful encounter with God. It is narrated by Rich Miller in a voice that is loud, clear, and compelling, capturing the strong and dramatic moments of the story professionally." (Five-star review by Romuald Dzemo for Readers’ Favorite)

What listeners say about Autobiography of a Modern Prophet

A life-transforming book! You can't possibly read it or listen to it without becoming aware of changes within your own self. Each time I have read and/or listened to Autobiography of a Modern Prophet, I come away with gems to help me in my own life.

Having read it several times, I was delighted when it became an audiobook! While I loved reading the printed word, listening to this book took me to another level entirely! Also, I can now listen to it while walking, cleaning the house, or driving in the car.

Truth rings from every page and touches my heart in a way no other has. Harold Klemp shares his story from a modest upbringing to becoming the spiritual leader of Eckankar. For anyone on a spiritual journey, which is all of us, it is a must-read.

The narrator, Rich Miller, has a deep, powerfully rich voice that immediately transports you into the worlds the author, Harold Klemp, speaks about. Highly recommend!

Harold Klemp honestly tells us what it takes to travel into the inner worlds of God and return to live a full productive life in love and service.
He gives clear instructions for uplifting and improving our daily life, while also revealing inner worlds that are available for us to travel and experience.
If you want more out of your life, I highly recommend this book. If you want to really know how to give and receive love and know your true self, Soul, this book is for you.

The author's description of his spiritual journey is Filled with wisdom, candor and humor. So many truths he discovered as he searched and found his connection with the source of all love… God otherwise known as the Sugmad. Even though I read the book hearing it live brought it all back to my heart in technicolor. A gift for Spiritual seekers who are curious about one man's impeccable commitment and devotion to loving life and God.

A most extraordinary narrative

Harold Klemp authors this first-person auto biographical story of his life, quest for God, and spiritual master ship. It is an awe inspiring narrative.

Autobiography of a modern prophet is a book that keeps you on the edge of your seat. It’s hard not to sit down and want to listen to it all the way through.

wonderful book . Accompanied me on my car journeys

absolutely loved it. splendid piece of inspirational work. Inspires me to be a better person.