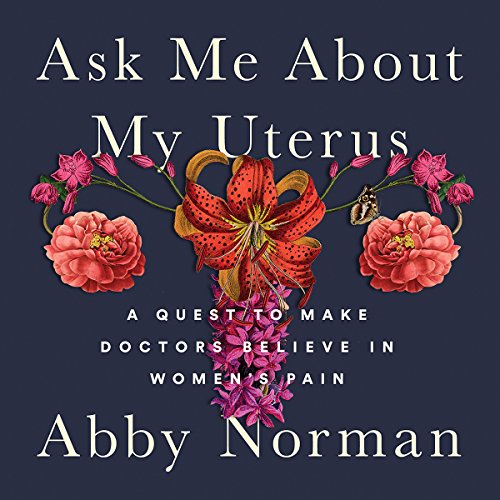 Ask Me About My Uterus

For any woman who has experienced illness, chronic pain, or endometriosis comes an inspiring memoir advocating for recognition of women's health issues

In the fall of 2010, Abby Norman's strong dancer's body dropped 40 pounds, and gray hairs began to sprout from her temples. She was repeatedly hospitalized in excruciating pain, but the doctors insisted it was a urinary tract infection and sent her home with antibiotics. Unable to get out of bed, much less attend class, Norman dropped out of college and embarked on what would become a years-long journey to discover what was wrong with her. It wasn't until she took matters into her own hands - securing a job in a hospital and educating herself over lunchtime reading in the medical library - that she found an accurate diagnosis of endometriosis.

In Ask Me About My Uterus, Norman describes what it was like to have her pain dismissed, to be told it was all in her head, only to be taken seriously when she was accompanied by a boyfriend who confirmed that her sexual performance was, indeed, compromised. Putting her own trials into a broader historical, sociocultural, and political context, Norman shows that women's bodies have long been the battleground of a never-ending war for power, control, medical knowledge, and truth. It's time to refute the belief that being a woman is a preexisting condition.

"Required reading for anyone who is a woman, or has ever met a woman. This means you." (Jenny Lawson, author of Let's Pretend This Never Happened and Furiously Happy)

"Compelling and impressively, Norman's narrative not only offers an unsparing look at the historically and culturally fraught relationship between women and their doctors, it also reveals how, in the quest for answers and good health, women must still fight a patriarchal medical establishment to be heard. Disturbing but important reading." (Kirkus Reviews)

"This book deals with such an important subject. Abby Norman's odyssey with her own health is sadly an all too common story to those of us who suffered in silence for so long. My hope is that anyone involved in women's health will read her story and revisit the way we treat women and their health concerns in our culture." (Padma Lakshmi, New York Times best-selling author and cofounder of the Endometriosis Foundation of America)

What listeners say about Ask Me About My Uterus

A fantastic memoir and history of female pain

Beautifully read and written. A must for anyone with endo or chronic pain. Note that this is written as a memoir and not a history of endometriosis (although that is included).

The narrator told her story beautifully. Going to it listen again. Truely inspiring to women.

I loved this book and the many stories she told in it. I laughed, cried, cursed aloud at the drs who don’t listen to the cries of women suffering and just down right enjoyed listening to this book. Thank you Abby for sharing such personal parts of your life!

Abby Norman's memoir of her struggles with endometriosis is full of tenderness, wit and her sharp intellect. Ms. Norman's candor and vulnerability are a gift to readers. Her book is the rare exception in which the author is the perfect reader of her own work.

A friend suggested this book to me, and I loved it! I highly recommend this book to anyone who has ever had a uterus, or loves someone who does or did have a uterus. I've fought many of the same battles she outlined in her book. It's 2021 and we still don't have any better choices for treatment of Endometriosis and typical co-morbidities than we had 20-30 years ago. Accept nothing less than the absolute best care you can find. It still takes way too long to get a diagnosis, and many of us are treated as if it's all in our imagination. No. It's real. Keep fighting through the misinformation. Educate yourself. Inspire others to learn and do more. Become your own best advocate. Listen to your body. Listen to this book! 😁🌈

Should be required reading in medical school

Brilliant, witty, devastating, and so important. As another woman will chronic illness, thank you, Abby!

This book should be required reading/listening for anyone working in the health care field. Abby eloquently tells her own story, in addition to stories of other people’s journeys with endometriosis and the apparent lack of research and attention for this widespread health condition. The book is captivating for the start and I am so thankful for her work.

While Ms. Norman's command of the english language is noteworthy, her narration eloquent, and her experience useful, the book covers several chapters worth of unrelated material that could leave an anxious reader looking for answers wondering when we get to her about her uterus. I in no way want to undermine her traumatic childhood or the profound influence of certain people in her life, but stories like that are better suited for her memoirs and not this book. The few bits that are relevant could be summed up in a single paragraph, and her inability to stay on topic makes the whole book read as though she as an author is inexperienced, and perhaps did not have a component editor.
Despite this, her retelling of the struggles she has had with endometriosis are comforting, as someone who's struggling myself I find it affirming that she can describe so well what the pain is like. I only wish she talked more about her uterus, and less about her childhood.

As a gynecologist, I think this moving book is a must read for all physicians who wish to better understand their patients.

This book brought me peace with my diagnosis. Thank you immensely. I've been formally diagnosed for 5 years now. Recently, my endo has progressed and has now attacked my ovaries, bladder, and bowel. I am only 23. Along with endo, I have an ever growing list of autoimmune disorders popping up like dandelions in the early spring. I am a physician's nightmare of a patient as I have a BS degree in Public Health with an emphasis in patient advocacy. I am also a pitbull when it comes to insurance denials. It was so nice to hear another's story of patient advocacy and that I am not just a bit*h, but rightfully fighting for my right of proper and comprehensive Healthcare.

This is a tough, but really important read. It's a graphic account of the author's illness, the devastating effect it's had on her life, and how much worse her experience was made by her struggles to get a diagnosis and treatment. One of the things that struck me most was how the cost of healthcare worsened the situation - for example, she had to stop taking the hormonal contraception she was taking for endometriosis because the brand she was taking was discontinued and she couldn't afford any others. A real eye opener.

Wow. So much I can relate to. Quite sad I’ve finished it I so enjoyed listening to you read your work. Thank you Abby!

A very worthwhile book. Well read and, as an Endometriosis sufferer one feels understood and part of a community in which we all share the anger of not being believed by medical profesisonals and others. The fact that Norman also shares her biography puts everything into perspective and turns the book into a lovely, touching and at times funny biography of a modern woman. Absolute recommendation.

Abby's storytelling is validating, compelling & immersive. Anyone with chronic health conditions should read this.