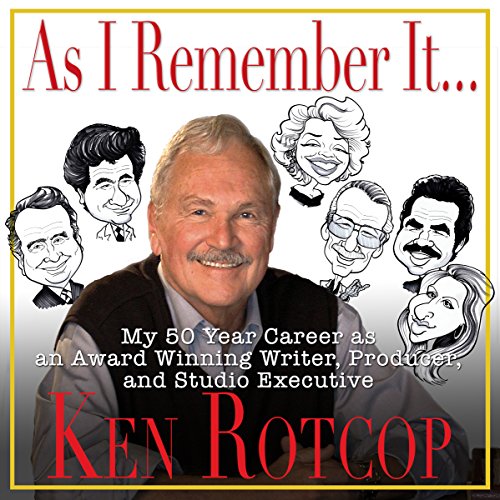 As I Remember It

As I Remember It

From Marilyn to Streisand and all the celebs in-between.

Film producers and studio executives know the nitty-gritty behind the scenes. Award-winning writer, producer, and executive Ken Rotcop now tells all about the comical, dramatic, and tragic celebrities he befriended.

Look through the mirror on the wall to see the stars as they were without their masks, including Marilyn Monroe, Peter O’Toole, Mel Brooks, Peter Faulk, Monty Hall, Regis Philbin, Mickey Mantel, John Barrymore, Jr., Baron Hilton, and Jack Klugman.

"Before you can get someone to read your screenplay you have to know how to write it. Ken Rotcop is the master at teaching writers how to tell a story." - Oprah Winfrey, The Oprah Winfrey Show

"Forget about snappy dialogue, characterization and plot. It’s the pitch that gets a script read and a movie deal done. If it were not for Ken Rotcop, most new writers would be out of the loop." - John Lippman, Wall Street Journal

"Two-thirds of the earth’s surface is covered with water and the other third is covered with people who have fabulous ideas for shows if only a producer would give them an opportunity. Ken Rotcop, an award-winning writer and producer, provides a guiding light to this group." - Robert Siegel, All Things Considered, National Public Radio

"Mr. Rotcop was the single most influential person I’d met in the early years of my career. He gave me the courage to go after my dream. He is an industry legend." - Andrea Leigh Wolf, author, Sell Your Screenplay

"I first met Ken Rotcop years ago when I was a panelist on a game show and he was the writer. His books are filled with terrific stories and funny anecdotes. The boy can write!" - Rose Marie, star of The Dick Van Dyke Show

"Having toured the country and lectured with him, I can honestly say no one can captivate an audience as Ken Rotcop. His stories and his humor keep the audiences clamoring for more." - Doug Schwartz, creator, producer, director, Baywatch TV series and feature films

"Hollywood veteran Ken Rotcop is the Master Pitchmeister. His sometimes dramatic, sometimes hilarious collection of personal anecdotes will lead you through all aspects of a life well-lived." - Marlene McGarry, co-author of Living the Blues: The Story of Canned Heat