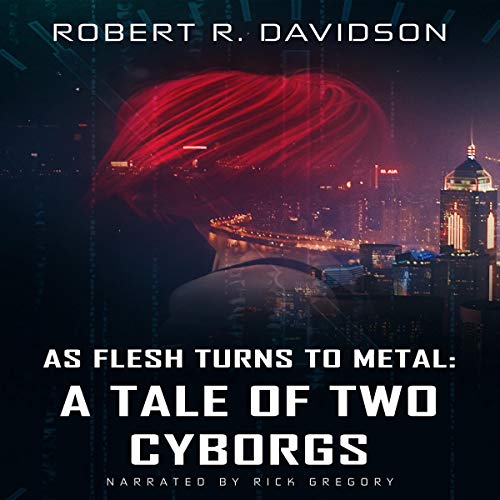 As Flesh Turns to Metal

As Flesh Turns to Metal

Free-agent cyborg Zydeck Salinger has to blast, rip, and wind his way to Ophelia Branson, a girl who's been kidnapped from her Homeport on the edge of the Sol system. Along the way he will obviously fight creatures with tentacles; and clearly he will suffer seduction by a vivaciously green, three-legged woman; and without question he will free humanoid and slug females alike from slavish captivity; but will he bring home the girl? And if he does, will he do it with classic noir flash? Will he drink whiskey with a robotic arm and use the same to shoot the bird to the tentacled things?

The first stop on this classic thrill ride full of sci-fi flair is Isocon, the perilous magma-fueled entertainment district. The universe put a chip in him and now he's paying it back with detective smarts. Ophelia was taken from Willow Springs - you know, that neighborhood just beyond the warmth of the sun; yes, just this side of the deep black abyss of space, the vastness.

I really enjoyed this story. Science Fiction is not the top of my list of genres but this one really pulled through. I really liked the description and explanation from Zydeck as he processed things that were foreign to him. It was neat to hear a cyborg’s rationale for what I would say are both common items to humans and some uncommon things, like three legged women. The details and descriptions were really solid and for me was the most enjoyable part of the story. It provides the world through Zydeck’s eyes and mind and was excellent writing

The plot and setting was really fun. Old school detective type feeling, but in another galaxy. The parts that took place in an alien strip joint really amused me. The Upscale felt like Arnold’s Total Recall bar scene. Definitely a sexy and fun story. I understood why there was the II portion in the story but it seemed to take up too much of the story and distracted me from the parts that I enjoyed. The reimagining of informants was neat although it didn’t provide the seedy underground feeling I thought it was trying to portray.

As always Rick Gregory did a fantastic job. Wish there was more character voices needed as he really shines with those.

Great little Sci-Fi story. It was a little slow to start but then it really picked up the pace. Zydeck Salinger is a free agent cyborg hired to find a missing girl. He encounters some strange aliens, some nasty and some naughty lol. A very enjoyable story and a great narration by Rick Gregory!

Not for me.I tried,I just couldn't make sense of it.It all seemed to be descriptions of aliens.Narration by Rick gregory was great though.I was given this book by the narrator,author or publisher free for an honest review.

a tale of two cyborgs

over all really well done, the story is a little short and breezes over some of the tech(which can get boring at times, i admit). story has elements of the "old noir private eye" genre, which i thought was great. Rick Gregory does an excellent job, solid performance, gives characters their own voice. definitely worth the listen

I received this audio book for free in exchange for my honest review. This is a well written story, but the monotone voice of the narrator nearly put me to sleep. I would suggest that you not listen to it while driving.