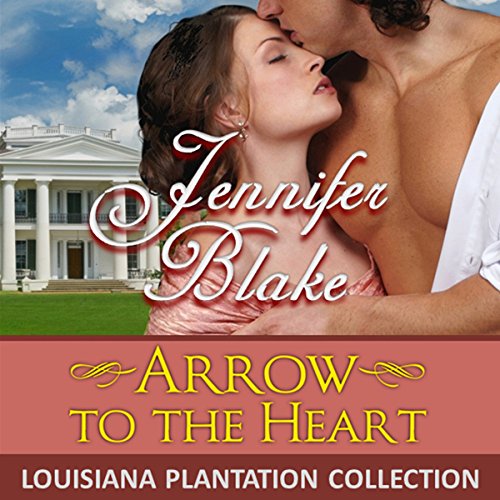 Arrow to the Heart

Arrow to the Heart

To ensure the quality of our reviews, please listen to this title before writing a review.

Around two of the most wonderful characters she has ever created, Jennifer Blake spins an utterly passionate story set within a steamy, languorous time and place: 19th-century Louisiana, where a Southern version of the medieval court of love still flourished....Arrow To The Heart.

Their marriage merged two of Louisiana's most prominent families. But after five years, Katrine remained untouched in body and heart, her husband unable to fulfill his wish to produce an heir. For the sake of that goal, Giles would allow his wife to be bedded by the noble man who won the annual tournament of champions, a medieval contest held on the grounds of Arcadia, his magnificent estate.

The honor fell to Rowan de Blanc, who had his own secret reason for joining the games. Katrine refused to submit to her husband's insane demands, no matter how devastatingly attractive her chosen partner. Succumbing to temptation would mean defeat for them both...until love and desire interfered with their best intentions.

The story isn't too bad, but it is a little strange. I will blame it on it being an older book, about an older time. It would be easy to be offended by this book nowadays.

The narrator was terrible. I didn't like her voice, but could have dealt with it if the editing was better. This was the worst editing I have ever heard in an audiobook. Crucial pauses are eliminated, making the flow of the narration very off. Worst of all are all the repeated lines from when she messed up and started recording again! Did nobody listen to this even once before publishing it? Also, narrators shouldn't have ice water around when they're recording, you can hear the ice settling. Please...just have regular water! It's quiet!

Story was good, but narration was awful. Narrator kept on breathing in heavily which was very distracting and also, she often repeated the sentences twice! Not very professional

Would you be willing to try another one of Moe Egan’s performances?

This audiobook is poorly edited and produced

The poor editing and production of this audiobook was annoying although I did like the story itself. The narrator repeats several lines and you can hear background noise such as passing vehicles or mobile phone text alerts. Overall it was ok.