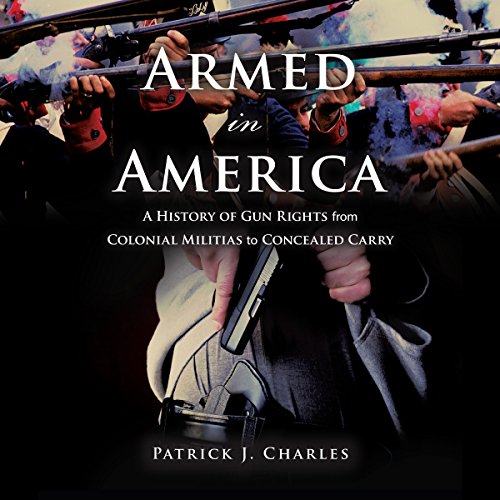 This accessible legal history describes the way in which the right to bear arms was interpreted throughout most of American history and shows that today's gun-rights advocates have drastically departed from the long-held interpretation of the Second Amendment.

This illuminating study traces the transformation of the right to arms from its inception in English and colonial American law to today's impassioned gun-control debate. As historian and legal scholar Patrick J. Charles shows, what the right to arms means to Americans, as well as what it legally protects, has changed drastically since its first appearance in the 1689 Declaration of Rights.

Armed in America explores how and why the right to arms transformed at different points in history. The right was initially meant to serve as a parliamentary right of resistance, yet by the ratification of the Second Amendment in 1791 the right had become indispensably intertwined with civic republicanism. As the United States progressed into the 19th century the right continued to change - this time away from civic republicanism and towards the individual-right understanding that is known today, albeit with the important caveat that the right could be severely restricted by the government's police power.

Listeners looking to sort through the shrill rhetoric surrounding the current gun debate and arrive at an informed understanding of the legal and historical development of the right to arms will find this book to be an invaluable resource.

What listeners say about Armed in America

This book is the work of a liberal lawyer/historian who is obviously bent on connecting the 2nd amendment to the English concept of the militia controlled by the government, although well written and narrated it is biased in the liberal direction, we must remember anything can be used or excluded for the purpose of proving a point when you are a lawyer

The author spends the entire first chapter talking about how he went to such great lengths to check all of his facts and ensure that everything he presents is nothing but the truth to the best of his ability. With that kind of introduction, I found it amazing that at Chapter 2 2:09, he goes on to talk about how the shooters in the San Bernadino shooting performed their attack with "legally purchased assault rifles." 1) Those rifles were not purchased legally- it was a strawman purchase because the terrorist themselves thought that they would not pass a background check. Please reference LA Times article from 12/16/15 for further details. Secondly, the author uses the term "assault rifle," whereas this is a US Army term denoting "a selective-fire rifle chambered for a cartridge of intermediate power." Since the rifles they purchased were only semi-automatic and not a selective fire type a la the US Army, they were not "assault rifles" and thus, the statement is false.

This may seem like petty pedantry, but if you're going to boast on how factually correct your book is (especially after saying that most of the commentary in the Heller case was incorrect), you shouldn't have such a glaring mistake in the next chapter. While I'm sure there are some great points in the book, I do not have the desire to fact check each and every one of this author's claims since that defeats the purpose of this book's intended aim. A shame, too, as I did enjoy the narrarator's performance.

Good book to start a conversation with an Anti-2A

I highly disagree with the author on some things, and believe that he isn't as well versed in the history as he might think.
Henry II, just after John I (Robin Hood Fame) was a tyrant. His son decreed EVERY Englishman be Armed to Keep the Peace. No matter his station, Noble or Commoner, he had to have some sort of weapon.
Sir William Blackstone Commentaries On English Law.
Volume 1: On The Rights Of The People.
Chapter 13: On Maritime And Military Law.
Edward I made it Law.
Blackstone went so far as to say that Disarming a population is the same as enslaving them.
Volume 2: Of The Rights Of Things.
Chapter 27: Of Prerogatives And Forfeiture.

Should have read the other reviews on this before I bought this.
Communist propaganda made to look neutral.

Malinterpretation of the 2nd amendment