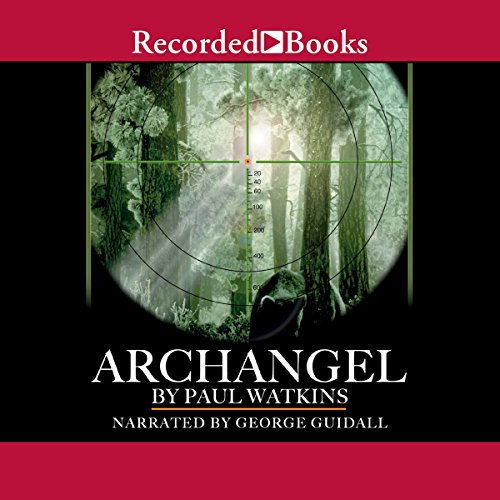 A Novel
By: Paul Watkins
Narrated by: George Guidall
Length: 11 hrs and 42 mins
Categories: Fiction, Contemporary
4.5 out of 5 stars 4.3 (6 ratings)

Paul Watkins is receiving national acclaim for his razorsharp prose. He is often compared to legendary writers like Ernest Hemingway and Jack London. Archangel takes the listener deep into the woods of Maine, where two determined men clash over acres of valuable trees.

Noah Mackenzie, an ambitious businessman, is racing against the clock to log thousands of acres of ancient forest before new legislation can stop him. Reclusive environmentalist Adam Gabriel is willing to give his life to protect those majestic pines. As profits and preservation collide, the conflict brews a devastating combination of natural catastrophe and social violence. Paul Watkins’ riveting novel turns a towering northern landscape into an ideological battlefield that is compelling and absolutely unforgettable. Watkins’ powerful work has made him one of the best-reviewed new writers on the current American literary scene.

Ending was Disappointing, but Still Worth the Read

Anything George Guidall narrates will get my attention, so it was this avenue that brought me to Archangel. Guidall's narration was flawless! The story was very engaging and interesting throughout -- until the ending chapters. There it seemed to fold in on itself, with questions left unanswered. The main character, a rough, ruthless and sometimes mean owner of the only logging business left in the Maine woods just sort of "fades" to black in the final scenes. Similarly, we are left wondering what happened to all the other players, the logging business itself and the company town. Yes, the "hit man's" outcome is revealed, but what about the budding love affairs, the damaged, the injured? This is a special story about the north woods and corporate logging interests battling with environmentalists. You will learn a great deal about both while listening. I only wished the author would have tried harder to find resolution for the many circumstances he established in the storyline.