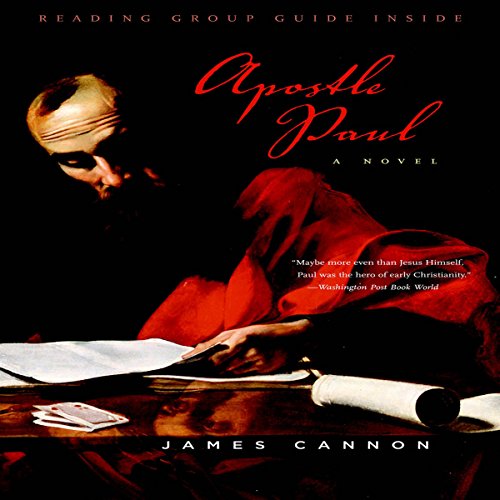 The iconic Saint Paul - in his lifetime a scholar, prosecutor for the high court of the Jews, accomplice in murder, adventurer, traveler, orator, writer, advocate, and organizer of a new faith - was in fact a Jewish-Hellenistic citizen of the Roman Empire, a man who by the force of his intellect and indomitable will changed the course of history. Eventually he became the leader of the movement that delivered the social and moral authority of Christianity to a pagan world. His quality of mind and ability to exhort and persuade, his personal commitment to ethical conduct and values, and his courage and indefatigability made Paul one of the continuing forces in the progress of Western civilization.

"Without ever sacrificing story, Cannon neatly explores the various doctrinal squabbles between Paul and the apostles who knew Jesus. A solid addition to the biblical fiction shelves." ( Booklist)
"A splendid work of disciplined imagination, giving flesh to a complex man who sought to live by the Spirit." (Kenneth L. Woodward, longtime Religion Editor of Newsweek and author of Making Saints)

What listeners say about Apostle Paul

The author does a nice job of weaving the few known facts about Saul/Paul into a good novel. Clearly, the author had to take liberties since there is scant information known about the apostle. The story was enjoyable and the narrator did a good job. I'm sure that the author conducted a lot of research to keep a book based largely on conjecture believable. For that, I applaud this effort. As a Christian, I was looking for something that would further my understanding of the early church movement and the interaction of the apostles. While no one knows for sure how accurate this account could be, it is probably in the ball park. I gave it four stars as it was very good, but not outstanding. I gave the narrator four stars as he did not change his voice as different characters spoke like the very best narrators do. Would I recommend this book to anyone interested in how Christianity spread from inside the walls of Jerusalem to the outer parts of the world? YES!

The narration is lacking. It is very difficult to listen to the same sing songy pattern for 17 hours. I recommend J.C. Hayes vary his intonation to match the action.

it was an interesting historical novel. wonder how much is factual? such as Peter's inaction and hostility between them as well as hostility with James.

the narration didnt seem to fit the story. it wasnt bad per se, just not the quality and style I would have expected.

What did you love best about Apostle Paul?

just the whole story of Paul .

What was one of the most memorable moments of Apostle Paul?

the journey of Paul

its made me understand the life of Early Christian's