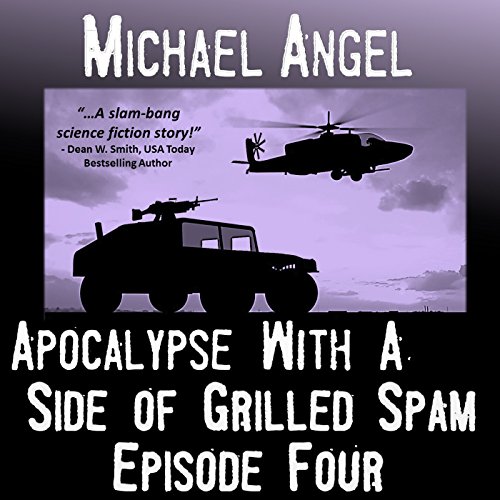 Apocalypse with a Side of Grilled Spam

By: Michael Angel
Narrated by: Jon Goffena
Try for $0.00

After spending more than 21 months on the Top 100 Lists, Strangelets Episode Three takes us further into the post-apocalyptic world of the original short story. This new, expanded tale is being released as a set of 24-30K word 'Episodes'. The fourth and final episode to come in Mid-Summer 2013!

Pursued by packs of deadly 'steelies,' Lieutenant MacWilliams and his Humvee crew have journeyed through an America shattered by an alien invasion.

In Episode Four, Lieutenant MacWilliams must lead the way back to Glenpool Springs.

Their way is blocked by the now-roused steelies, vision-shrouding sand storms, and nightmare plains turned to radioactive slag by nuclear fallout.

On top of that, a startling revelation about the ZPE unit threatens to change the very nature of the war MacWilliams is fighting.

And at the end of it all looms the final confrontation with the horde of steelies descending upon Glenpool....

The 30,000 word novella Strangelets with a Side of Grilled Spam: Episode Four also includes preview chapters of Michael Angel's best-selling fantasy novel, The Detective & the Unicorn.

What listeners say about Apocalypse with a Side of Grilled Spam