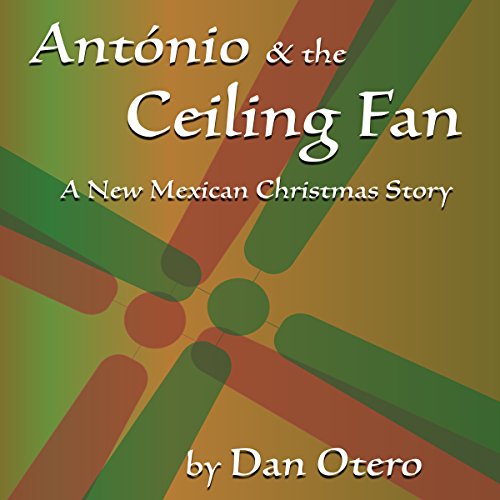 Antonio and the Ceiling Fan

Antonio and the Ceiling Fan

Antonio and the Ceiling Fan: A New Mexican Christmas Story is a short story set in rural northern New Mexico. It is a holiday story of magical realism, focusing on a teenager coming to realize the power of his family, his mother, and the mortality that we all face. He also has a talking ceiling fan.

Disclaimer: This short story contains a fair amount of Spanish dialog, most of which is described in context.

A charming, heartwarming, quirky story with...

The eBook was free on KU but I’m glad I got the audio, because it’s fantastic. It’s a “full cast” and done like an old-time radio program with sound effects, which was fun. The main audio narrator was amazing—she also does the mother’s voice.

Some of the dialogue is in Spanish but it’s mostly in context so you get the point. My rudimentary Spanish filled in most of the rest, and what I didn’t catch (since I had the eBook) I Googled. Personally, I liked the Spanish—it felt authentic to the story and the region.

Great story for anyone, anywhere but even more fun if you live in New Mexico—I like to read/listen to things set in the area I live.

A delightful tale with multiple facets

The fact that the ceiling fan turned out to be a character in itself (of sorts) was actually really clever and symbolically relatable! At the begining, I thought the tale would be about the internal dialog the fan represented, but turns out the story was about something compleatly different in the end. It was a wonderful turn of events and a great ending that reminds us to continue being grateful for what we have. The narration with multiple voices, accents, and spanish snippets really gave this tale an authentic New Mexico feel! Loved it :)