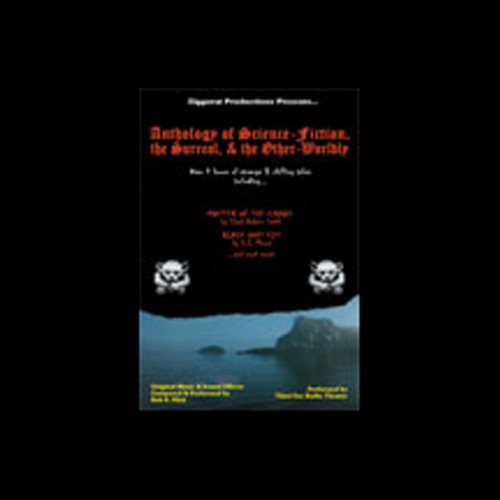 Anthology of Science Fiction, the Surreal, and the Other-Worldly (Dramatization)

Strange and chilling tales of horror, science fiction, fantasy, and the surreal. A unique blend of short stories for fans of all audio genres!

What listeners say about Anthology of Science Fiction, the Surreal, and the Other-Worldly (Dramatization)

Most short-fiction anthologies contain stories you love and stories you hate, but this audiobook puts a slight twist into that formula. By and large, the stories are mediocre, but the performances are good enough (and occasionally over-the-top enough) to draw you in.

"Master of the Crabs" and "Taurus Horn" are highlights, while "Venus Cursed" had excellent potential but was spoiled by a slightly rushed ending. On the other hand, "Black God's Kiss" doesn't adapt well to audio, and "Frozen in Time" is a particularly dull version of an old sci-fi cliche.

The Smith and Moore aren't really "dramatized"...more like read with sound-effects. They're interesting, Smith more than Moore. The others are original radio plays that are much less compelling. I'm not sorry I bought it...but, it could have been better.

The stories were at best disjointed. The voice performances were at best average. I am a long term listener of voice dramas and this one misses the mark. The stories would build you and then lose all sense and go somewhere else. I measure voice dramas against the standard set by the BBC with Pet Cemetary or even the Hitchhikers Guide. They are/ was the pinacle which all should work towards. Enthusiastic readings with substandard content don't cut it.

I don't see them here, but the Deathlands series is well done, even though it is one person covering all the characters.

I only enjoyed Master of Crabs.

The audiobook has an old retro feel of 80's movies left on in the background which is charming in some aspects. Some of the stories are trash tho and there is random music in here? I was kind of on the fence then I heard them and was like why would anyone throw musical numbers into here. The Master of Crabs chapter 6 in the book is the only one I enjoyed props to them for that it was great really sucked me in and had just a great overall narration of foreboding tone that made me want to learn more and listen intently. If they would do more of the old school fantasy horror/Lovecraftian with great narrators I'd 100% buy The production company Ziggurat productions does have some stories from lovecraft and they are mostly great but yea stick with that not these weird scifi musical oddities.

This has to be the worst audio I have ever listened to. Some of the stories would have been interesting if there had been any cohesivness to thier presentation and if the awful music had been left out.

I'm not sure who the 'Third Ear Radio Theatre' are, but I wasn't taken by them on the evidence of this compilation. The individual items fall neatly into three categories: classic tales, new writings, and 'Radio 2000'.

The two classic tales (by Clark Ashton Smith and CL Moore) are adventure-horror yarns in the super-melodramatic, vaguely Lovecraftian style. They're narrated here against a background of music and sound effects to add to the atmosphere. The narration is well done generally, although the complex grammar and vocabulary seem to be beyond the narrator's understanding in places. The music tends to swell at the dramatic points, sometimes with enough volume to drown out the narration, which is annoying but won't make you lose the thread.

The five following stories were, I think, written as well as acted by members of Third Ear. These are straight science-fiction tales rather than horror, and something of a mixed bag. They're very much run-of-the-mill, but you'll probably find something to like and perhaps even think about in at least a few of them.

'Radio 2000', which ends the compilation, continues the sci-fi theme with a fast-moving collection of clips that are supposedly from the audio entertainment medium of the future. They seem intended as comedy, but I found nothing funny or interesting in any of them.

If you have a spare Audible credit burning a hole in your pocket, and you really like CAS and Moore, you may decide it's worth buying for the two classic tales alone. If you find enjoyment in any of the new writings as well, consider it a bonus.