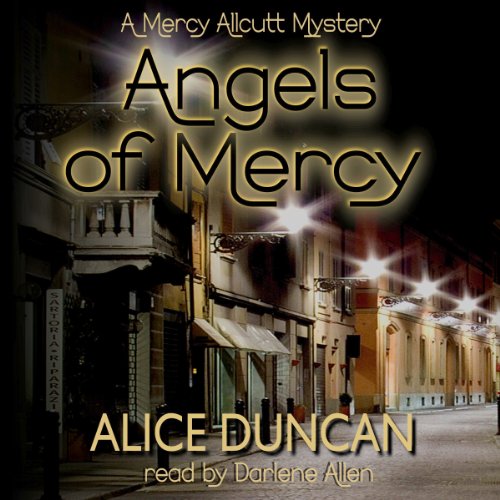 By: Alice Duncan
Narrated by: Darlene Allen
Try for $0.00

Former Boston Brahmin Mercy Allcutt is excited to be renting out suites of rooms to deserving working women in her new home on Bunker Hill in Los Angeles. She considers she's performing an act of good-heartedness, no matter skeptical her boss, private investigator Ernie Templeton, is about her endeavor.

When her housekeeper's son is arrested for the murder of a Hollywood big-wig, Mercy presses Ernie to solve the case. She's positive Calvin Buck is innocent. Ernie tells her he'll do his best. She's not entirely convinced he means it, so she does some snooping on her own.

In the meantime, Mercy not only takes driving lessons from Ernie, but she discovers there's more to being a landlady than meets the eye. Is one of her Angels of Mercy not what she appears to be? Only time, and perhaps Mercy and Ernie, will tell . . .

What listeners say about Angels of Mercy

What did you love best about Angels of Mercy?

I love the character development, the whit and how you can really feel the characters personality throughout the story line.

I love the narration and how Darlene Allen really gives personality to each individual character through expression, voices, pauses and much more! The conversations and scenes are very palpable and believable. Alice Duncan does a great job of incorporating subtle humor, history, and intrigue into her stories. I think the Mercy Allcutt series would make a great movie!

Mercy is living up to her name, now a home on Bunker Hill, shows she has money. Now she is landlady renting out rooms, when one tenant is in trouble, persuades Ernie to help. He didn’t seem too willing so off she goes to solve. Enjoyable and good narration make this series a winner. Given audio for my voluntary review and my honest opinion

I don't know how ,, but Mercy always ends up in the middle of any catastrophe that might be happening around her. She is so hilarious with her prim and proper upbringing, that seems to make her correct everyone's swearing or maybe it is because she hates bad language skills., as she hopes to be an author. This is the main reason she went to work for Ernie Templeton P. I. The relationship between those two is really good for a laugh, especially now that Ernie is teaching her to drive the roadster her sister Cloe gave her.. The mystery in the case they are working makes for some suspenseful moments wrapped up in laughs. This author is great at writing a humorous mystery and I hope to read or listen to more of her books.
I received a free code for this book from Audiobooks Unleashed to listen to on Audible. This review is my own honest opinion