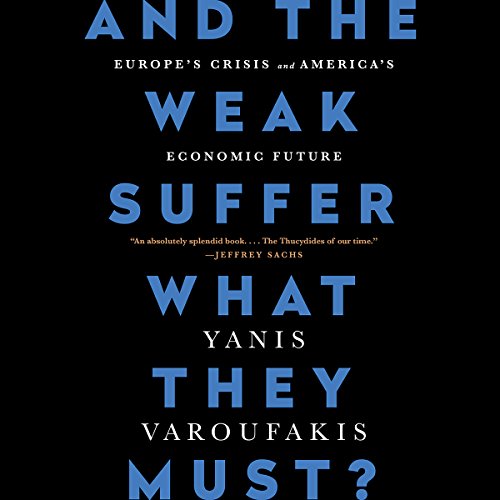 And the Weak Suffer What They Must?

A titanic battle is being waged for Europe's integrity and soul, with the forces of reason and humanism losing out to growing irrationality, authoritarianism, and malice, promoting inequality and austerity. The whole world has a stake in a victory for rationality, liberty, democracy, and humanism.

In January 2015, Yanis Varoufakis, an economics professor teaching in Austin, Texas, was elected to the Greek parliament with more votes than any other member of parliament. He was appointed finance minister and, in the whirlwind five months that followed, everything he had warned about - the perils of the euro's faulty design, the European Union's shortsighted austerity policies, financialized crony capitalism, American complicity and rising authoritarianism - was confirmed as the "troika" (the European Central Bank, International Monetary Fund, and European Commission) stonewalled his efforts to resolve Greece's economic crisis.

Here, Varoufakis delivers a fresh look at the history of Europe's crisis and America's central role in it. He presents the ultimate case against austerity, proposing concrete policies for Europe that are necessary to address its crisis and avert contagion to America, China, and the rest of the world. With passionate, informative, and at times humorous prose, he warns that the implosion of an admittedly crisis-ridden and deeply irrational European monetary union should, and can, be avoided at all cost.

What listeners say about And the Weak Suffer What They Must?

it was well written and an interesting thousand foot perspective on 2008, globalization, financialization, and the development of the eu.

Yanis give a serious historical analysis of the European economic politics. In an objective and non technical manner, he describes how the European economic crisis unfolded. But his book is useful for the citizens of non European countries also: I strongly recomend his book to everyone who wants to understand modern economic politics regardless of political orientation. Indeed, knowing "how things work" is useful for both democrats and republicans.

clear analysis of the European Crisis

Yanis Varoufakis is able to do what escapes most economists: explain clearly and honestly how we got the Euro Crisis and how to get out of it.

The only qualm I have with this production is that he did not read all of it himself. It was nice to hear him read the introduction and would have been perfect if he had read the rest of the book.