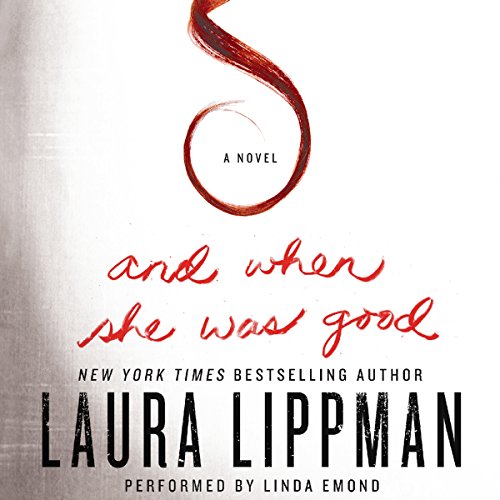 And When She Was Good

Perennial New York Times and national best-selling author and acclaimed, multiple prizewinner Laura Lippman delivers a brilliant novel about a woman with a secret life who is forced to make desperate choices to save her son and herself.

Heloise considers it a blessing to be a person who seldom attracts attention. In her suburb, she's just a mom, the young widow with the forgettable job, who somehow never misses a soccer game. In the state capital, she's the redheaded lobbyist with a good cause and a mediocre track record. But in discreet hotel rooms throughout the area, she's the woman of your dreams - if you can afford the hourly fee.

For more than a decade, Heloise believed she was safe, managing to keep up this rigidly compartmentalized life. But her secret life is under siege. One county over, another so-called suburban madam has been found dead in her car, an apparent suicide. As 40 looms and her son enters adolescence, Heloise is facing a midlife crisis with much higher stakes than most will ever know. With no formal education, no real family or friends, Heloise has to remake her life - again. Disappearing will be the easy part. The trick is living long enough to start a new life.

What listeners say about And When She Was Good

Wow! How to describe this book and its main character? Different, compelling, intriguing, appalling, thought-provoking - all come to mind.

Laura Lippman is a great writer, and she delivers here. The characters are well-developed and interesting. The book is structured in the one-chapter-in-the-present, one-chapter-in-the-past format. I'm not generally a fan of that style, but it works here, and the build up of interest and tension is palpable.

If you are like me, you will find your sympathies shifting around a lot in "And When She Was Good." Whether you believe this unique character and her story to be symptoms of the decline of civilization or an increase in tolerance, I think you'll find it to be thought-provoking and entertaining.

Where does And When She Was Good rank among all the audiobooks you’ve listened to so far?

I've listened to every Laura Lippman book on Audible. This was one of her best - Linda Emonds rocks as a narrator. I wish she narrated more books!

Yes. There were unexpected twists and turns to the story that kept me wondering what would happen next. Heloise's choices make sense based on what we learn of her past. Laura Lippman is a master of character development.

Have you listened to any of Linda Emond’s other performances before? How does this one compare?

I've listened to every Linda Emond performance of L. Lippman's books. This was one of her best. They are all good though.

Who was the most memorable character of And When She Was Good and why?

Oddly, I was drawn to the character of Audrey and her pivotal role in the story. She was a constant yet she still remains a mystery. In a good way.

Not your usual mystery novel...

I loved this book. Some times when I read a book, I can't remember what it was about within a month. I will not soon forget this one.

I gave this four stars, because I really got wrapped up in Heloise's life and how she problem solved. I could not put it down.

I do believe that women will find this a better read than men. Well, worth the credit. I will definitely add Laura Lippman to my favorite authors list.

I am definitely going to read more Laura Lippman. I enjoyed this book very much and the narrator was fantastic. The story line was well-thought out and filled in all the details in a perfect way for the reader. Very nicely developed.

You won't want to stop listening.

It's easy to be a Laura Lippman fan, especially when she writes such rich and complex characters like Tess Monaghan. But in this novel we meet another strong and complex woman in Heloise Lewis. As always, Lippman keeps you guessing to the very end. I hope we hear more from Heloise, and maybe even a novel featuring Tess and Heloise together!
It's a good one.... you won't be sorry!

A truly well-written novel with complex, imperfect characters - - in other words, real people. I like that this book talks about sex and prostitution without having to rely on the stereotypical graphic sex descriptions (not that there's anything WRONG with that) and relies instead on understanding the why and how of the main character. Love the narrator - - good job with being able to differentiate between characters. Throw in a family study and good who-dun-it and you've got a really good summer novel.

Very interesting story, may seem slow to some, but I liked it. I thought this story had a great plot line and definitely wasn't predictable! Now I'm interested in the rest of the books by Laura Lippman. I would def reccomend this book.

This book fails in a number of ways. It is difficult to really like the heroine. There are threads that are not developed--there is a problem between Heloise and her half sister that is introduced but never explained. The ending is very predictable, unrealistic and way too pat. I think that there was a reason that this book was put on hold for ten years.

This is the first Laura Lippman book I tried to read. I purchased it when it first came out, got about 1/3 of the way through and had to stop. I simply could not muster any empathy or sympathy for Heloise/Helen. At that point in the book I had yet to run across a single character that was likable.

The book put me off enough, I decided not to try the Tess Monaghan series, which I'd intended to begin.

Two years later I finally started the Tess Monaghan books and have read all of them published to date and liked or loved all of them. So I decided to give this book another try.

I started over and finally made it through the book. There were plot lines and twists I found interesting, but not fascinating. I also found the story beyond unbelievable. And the characters remained as unlikeable to me as they were originally. There was also no humor. But Lippman's writing skills shown through. She delivered a very tight, well written story, even if I didn't care for the plot that much. If you are a Lippman fan you should read this book. If you think you might want to become a Lippman fan, don't start with this book. If you do not care for her other books, I doubt if you will like this one.

Emond does a very good job with the narration.

A new stand-alone, wonderful as usual.

This is a stand-alone in which Helen, an abused highschool girl, leaves home and becomes part of an escort service. But when she finds she is pregnant, she turns in her handler/pimp for murder and he is convicted to life with no parole. Helen becomes Helloise and runs her own escort service with the cover of being a lobbyist. She does very well until a “madam” in the next county is murdered, and she realizes that it is someone who also worked for her handler. She begins to realize that she is in desperate danger, particularly to keep her son unknown to his pimp father. She has decided to get out of the game, but she has continued to pay money to her pimp in jail and he doesn’t want to lose the income. She wants out of the game, but will she live long enough to get out and bring her son with her? A gripping book which Linda Emond narrates with just the right amount of coolness to represent Helloise’s point of view. Very good, as usual.