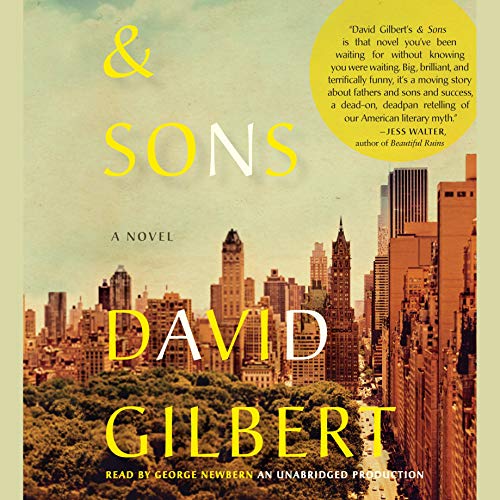 By: David Gilbert
Narrated by: George Newbern
Try for $0.00

Who is A. N. Dyer? & Sons is a literary masterwork for readers of The Art of Fielding, The Emperor’s Children, and Wonder Boys - the panoramic, deeply affecting story of an iconic novelist, two interconnected families, and the heartbreaking truths that fiction can hide.

The funeral of Charles Henry Topping on Manhattan’s Upper East Side would have been a minor affair (his 200-word obit in The New York Times notwithstanding) but for the presence of one particular mourner: the notoriously reclusive author A. N. Dyer, whose novel Ampersand stands as a classic of American teenage angst. But as Andrew Newbold Dyer delivers the eulogy for his oldest friend, he suffers a breakdown over the life he’s led and the people he’s hurt and the novel that will forever endure as his legacy. He must gather his three sons for the first time in many years - before it’s too late.

So begins a wild, transformative, heartbreaking week, as witnessed by Philip Topping, who, like his late father, finds himself caught up in the swirl of the Dyer family. First there’s son Richard, a struggling screenwriter and father, returning from self-imposed exile in California. In the middle lingers Jamie, settled in Brooklyn after his 20-year mission of making documentaries about human suffering. And last is Andy, the half brother whose mysterious birth tore the Dyers apart 17 years ago, now in New York on spring break, determined to lose his virginity before returning to the prestigious New England boarding school that inspired Ampersand. But only when the real purpose of this reunion comes to light do these sons realize just how much is at stake, not only for their father but for themselves and three generations of their family.

In this daring feat of fiction, David Gilbert establishes himself as one of our most original, entertaining, and insightful authors. & Sons is that rarest of treasures: a startlingly imaginative novel about families and how they define us, and the choices we make when faced with our own mortality.

"[A] big, rich book... With wit and heart, Gilbert illuminates the complicated ways that fathers and sons misunderstand, disappoint, and love one another and how their behavior affects the women in their lives." ( Real Simple)
"A marvel of uproarious and devastating missteps and reversals charged with lightning dialogue, Gilbert’s delectably mordant and incisive tragicomedy of fathers, sons, and brothers, privilege and betrayal, celebrity and obscurity, ingeniously and judiciously maps the interface between truth and fiction, life and art.” ( Booklist)
"David Gilbert’s & Sons is that novel you’ve been waiting for without knowing you were waiting. Big, brilliant, and terrifically funny, it’s a moving story about fathers and sons and success, a dead-on, deadpan retelling of our American literary myth." (Jess Walter)

What listeners say about And Sons

Full of brilliant bits and pieces

I came to this novel by way of a brilliant short story by David Gilbert in the "New Yorker" in which every detail is realistic and familiar - until the main character gets drunk and vomits, and the vomit turns out to be something like a baby. The rest of the story is about how he deals with the vomit baby, and it's funny, entertaining and truly heartbreaking. I wanted more of that. The novel "& Sons" is not like that short story. Late in the novel there's a bizarre bit about cloning that seems to attempt a vomit baby type vibe, maybe, but in any case it doesn't succeed. There are other parts where the storytelling doesn't succeed as well. The dullest son is a documentary filmmaker who records the death, day by day, of an old girlfriend as cancer consumes her. Then he digs up her grave and continues to record her decomposition day by day. This over-long story line is probably making a clever point about something - art maybe, or grief - but it fails to be compelling or profound or funny. It's a little upsetting, but that's not why I hated it - it's also unconvincing and boring. I almost abandoned the book. I'm glad I continued listening because the book is full of brilliant and entertaining moments. The writing is so good - full of vivid details and descriptions - that I would often pause the story and try to memorize them. It's worth reading despite its obvious flaws.

I would say that it was difficult to finish this book. By the time it was over I had no interest in the characters or their lives. I agree that there are passages of brilliant writing -but for the most part it was hard for me to stay engaged in the story.

Do you think And Sons needs a follow-up book? Why or why not?

"When someone uses the term "instant classic," I typically want to grab him and ask, "So this is, what, like the new Great Expectations? You sure about that?" But David Gilbert's novel & Sons, seductive and ripe with both comedy and heartbreak, made me reconsider my stance on such a label. & Sons feels deeply familiar, as though it existed for decades and I was just slow to find it." Mary Pols NPR

Pass on this one

Lots of words no story, Glibert tries too hard, painful. Could not even bother to finish listening to this one and I finished Atlas Shrugged.

A great book - but I can't like the characters

I'm glad I got this book and wanted to finish it. The men - and almost ALL the characters are men - are so unlikeable .... Sometimes reprehensible, sometimes cowardly, sometimes without any kind of moral compass...completely self-centered and self-destructive. That is the point of the story, I guess. I couldn't stop listening but ended as I began, disliking them ALL.

This book starts off with great promise and then wades into a tedious, in-cohesive muck. And so many people (claim to) love this book!
Was Mr. Gilbert's editor on vacation before this book went to print and told the publishing house, "I'm sure its great - print the whole thing, ramblings, musings, stoner philosophy - It's all good." Yes, I picture the author's editor as one of those irritating people who sum up every conversation with "It's all good".
Great premise, horrible execution and cloning? really??
This book should have stayed in a drawer.

If you're the kind of reader who takes pleasure in virtuoso narration as such, you'll like this. I admired the darting motions of clever prose and the third-person narrator's microscopic lucidity about his kinsmen's varied mental worlds. But the central relationships and conflicts hardly justify so much artfulness.The dominant theme is privileged sons' resentment of each other and of their novelist father, a theme in which petulance and self-pity play smudge over larger and more interesting emotions. A glittering structure with a weak core.

I am not sure. This may be a man's book,but in spite of this the story loses any vim and vigor it claimed to have at the beginning! I should have returned it.

What could David Gilbert have done to make this a more enjoyable book for you?

Tell a better story. I found this irritatingly confusing , tedious and last but not least poorly crafted.

I do not think it would matter.

Would you listen to And Sons again? Why?

yes, absolutely. i'm sure i missed some gem of a sentence and even if i didn't, these sentences are worth listening to again.

the prose is gorgeous.

he has a great tone, generationally, his voice fit the the narrator and also spanned the decades easily, and his acting was spot on, not overdone.

about fathers and sons and the tapestry that such relationships weave, however frayed.

the one sort of super-natural-ish plot point was a little jarring but the writing is so beautiful and assured, it doesn't end up mattering. exceptional book.