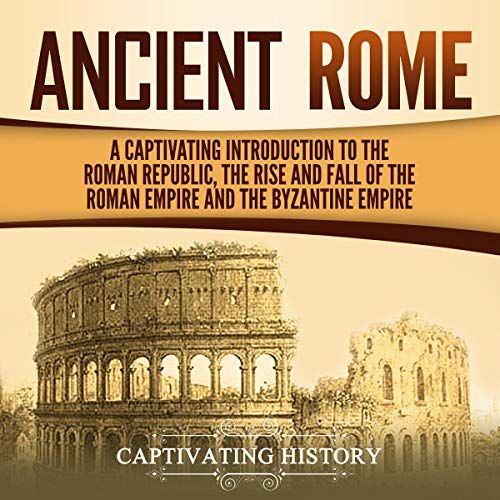 Ancient Rome: A Captivating Introduction to the Roman Republic, the Rise and Fall of the Roman Empire, and the Byzantine Empire

By: Captivating History
Narrated by: Timothy Burke
Try for $0.00

If you want to discover captivating stories of people and events of ancient Rome then keep reading....

The Roman civilization is probably the single most important civilization in the history of the planet. Its expansion defined Europe. Its constitution shaped societies from Russia in the east to the United States and Latin America in the west. Not even its conquerors were immune to the superior Roman culture.

In this new captivating history book, you’ll learn all you need to know about Roman institutions and politics. But our focus will be on the captivating stories and curious personalities of the Roman emperors, politicians, and generals - from Romulus, Caesar, Augustus, Trajan, and Hadrian to Constantine, Justinian, and Belisarius.

Equally important (and perhaps even more interesting) are the stories of influential women - mothers, wives, and lovers, from Cleopatra and Agrippina to Theodora and Zoe with the coal-black eyes - whose schemes often redirected the course of history.

Here are some of the topics covered in Ancient Rome: A Captivating Introduction to the Roman Republic, the Rise and Fall of the Roman Empire, and the Byzantine Empire:

Listen to this audiobook now to learn more about ancient Rome!

What listeners say about Ancient Rome: A Captivating Introduction to the Roman Republic, the Rise and Fall of the Roman Empire, and the Byzantine Empire

The narrator is awful. It’s a shame that they couldn’t find a way to more artistically talk about one of the most fascinating period of history on the planet. There are much better books that you can read and hopefully one day they’ll find an aerator they can actually engage a listener

I took a class on Ancient Rome over the summer, and I purchased this book because I found my textbook extremely dry and disorganized. I wanted something a little more engaging that would help me glean more from the course materials. I am a History major and absolutely love reading history books (that's pretty much all I read these days). This book provided nice snapshots of Ancient Roman history that really sucked me in and made the events of the time seem real.

My favorite overview of Roman history is neither a book nor documentary. Check out the Great Courses lectures on Roman history - either buy them or they are often available from your library. The lectures are interesting and the professor engaging. Best of all you can listen to them on your commute or next long trip.

Quite disappointed, this only provides very basic overview of each major part of roman history. if you want something with detail or breakdowns this is not the book. A lot is skipped over even Marius's or Scipios military reforms, law, wars or even society which I havent really heard anything on.

Very informative on the life our great President.

This book outline's the life, and history of a president an agrarian with intelligence beyond his years. The perfect history book.

Interesting history of the Roman rulers.

Interesting read that follows the Roman empire from its inception until falling apart. The focus is on the long list of rulers over many centuries and was enlightening. It reads as easily as a novel. I would prefer to have more insights into how they ruled their far flung empire. There are many parallels to current events. I would have liked additional insights into the culture and the massive engineering projects across the empire, however that is probably a different book(s). This one focuses on the rulers.

If you are curious about Roman history, you can't go too wrong with this book, just know that it's sort of like reading a history of America skipping about to just the cool bits. "George Washington becomes president, now off to Abraham Lincoln!" as thought nothing happened in between or to anyone who was not at the top of the heap.

I was some ways into this book when I began to think that this thing read like one of those not too serious documentaries on the History channel. Of course that's in fact what it is. I bought the book mainly because I enjoy Captivating History's writing and figured she would not endorse and write the introduction for something of questionable quality. Indeed, this is a very successful gloss of the high (read dramatic) points of Roman history.

I was pleasantly surprised.

I think you will enjoy this book, if you are like me and a relative novice on Roman history, give it a try.

A good overview of a huge subject

Of necessity, this has to be a little superficial, but it provides a good overview and starting point for more detailed research.
Personally, I found the reading slightly irritating, with every word being enunciated so clearly that the overall effect was distractingly staccato and robotic.
Still worth a credit though.