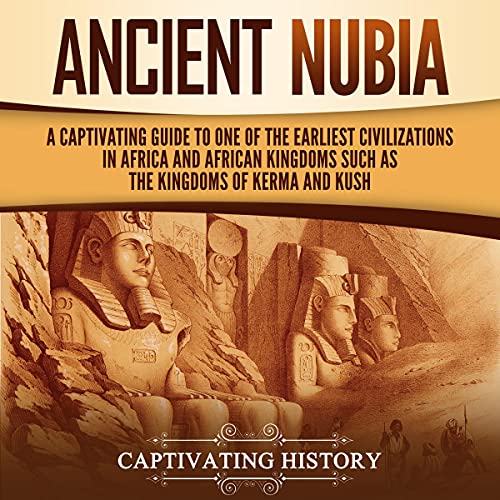 By: Captivating History
Narrated by: Jay Herbert
Try for $0.00

Underneath the desert sands, a forgotten culture awaits your discovery...

Its pyramids jut like wind-ravaged arrowheads from the ground, dominating the skyline of the desert plane. Sun-scorched air whistles through the carved stones of its ancient monuments, whispering of grandeur long gone, now nearly swallowed by unmerciful desert sands. Its secrets whisper. And its riddles beckon.

But now the mysteries of ancient Nubia are now laid bare, waiting for you to discover them!

The kingdoms of ancient Nubia rivaled the world’s greatest empires for thousands of years. For thousands of years, Nubia’s legendary kings and queens made war with the empires of Egypt and Rome, its jewelry and iron were traded as far away as India and China, and its gold built the temples and tombs of civilizations throughout the Mediterranean. For thousands of years, Nubia and Egypt shared their gods, art, architecture, and trade goods. Nubia’s achievements rivaled the greatest powers of the ancient world. And Nubia’s archaeological remains still dominate the landscapes of southern Egypt and Sudan.

Here are just a few of the secrets awaiting your discovery:

Listen to this audiobook to discover more about ancient Nubia. Its secrets wait to be revealed!

What listeners say about Ancient Nubia