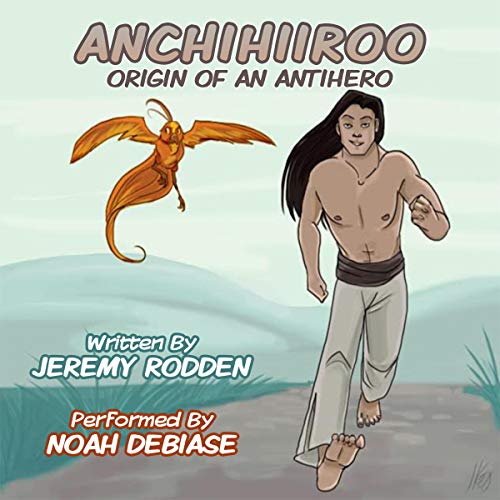 Anchihiiroo - Origin of an Antihero

By: Jeremy Rodden
Narrated by: Noah DeBiase
Try for $0.00

Author note: Tales from Toonopolis is a non-linear series of "side stories" or other genre-specific adventures taking place in a single section of the cartoon city. This story takes place in Animetown, the section of Toonopolis inspired by anime and manga and operates with the tropes of those forms of media. It would best be classified as a young adult coming of age adventure...with my Toonopolis flair!

In Toonopolis: Gemini, Anchihiiroo (aka Han'Eiyuu) is the former hero of Animetown who turns Rogue after meeting the devious Shadowy Figure, forcing his creator to change him into a villain instead of the anti-hero he once was. Yuki, the albino inventor of Wan-Wan, described Anchihiiroo's background:

"He had a terrible childhood. He was orphaned at an early age when his parents were killed in a war. Then his orphanage burned down, and then a flood wiped out the town his orphanage was in. He was the only survivor".

Learn the full origin of Anchihiiroo, from his tragic childhood as Yoshi of Higeki to the warrior training that allowed him to put a stop to the Ninja-Pirate War that plagued Animetown. Witness his relationship with the phoenix Suzaku and his inevitable Rogue turn after meeting the mysterious Shadowy Figure. It is a story about destiny and a young man's desire to make his own path in the world.

What listeners say about Anchihiiroo - Origin of an Antihero

A fantastic first audiobook for Toonopolis!

I've been waiting a long time for audiobooks of this particular series. I was not disappointed with this first installment.

The narrator brought the characters to life with many distinct voices, especially Suzaku who is my favorite. He really captured her musical, sassy, snarky voice. I also enjoyed his voice work with Yoshi and how the voice changed as Yoshi aged and becomes more unhinged. I hope that Jeremy picks us narrator again to work on future audiobooks.

As for the story itself, this is a nice short Novella in the to Toonopolis series and though it can stand on its own two feet it is helpful to have read the at least the first book in the main series (Gemini) to get background on the setting. I love that this tale shows a slightly different path for a stereotypical hero to take than normal. It shows how someone who has his life controlled by everyone else may react and lash out which I think is an important concept to explore.

More like jerk, on the road to being a villain, I mean even the bird was surprised and she waited 100 years for the correct person to come along and she didnt know? How is that even possible for a mystical creature whose supposed to know? The narrator did a good job with what he had to work with. I would not spend a credit on this 2 hour long book but it was given to me for my honest opinion and these are my thoughts. I think it was too short for in-depth understanding of why this guy was chosen because he certainly doesnt seem necessary to the story unless he is going to eventually become the villain.

Yea for the anti-hero!

Short book. The story seems a bit rushed and character development is a little lacking, but it is an interesting listen. Not sure if I would spend a credit on it, but it would be a great part of a collection set or a sale book.

This book was provided at no cost for a fair and honest review.