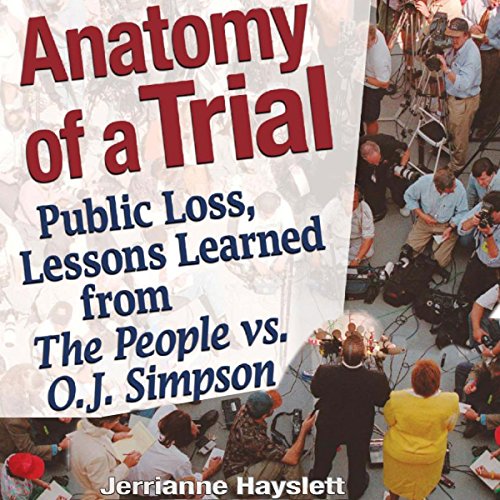 Anatomy of a Trial

By: Jerrianne Hayslett
Narrated by: Sheila Book
Try for $0.00

The People vs. O. J. Simpson ranks indisputably as the trial of the century. It featured a double murder, a celebrity defendant, a perjuring witness, and a glove that didn't fit. The trial became a media circus of outrageous proportions that led the judge to sequester the jury, eject disruptive reporters, and fine the lawyers thousands of dollars. Now an insider at The People vs. O. J. Simpson reveals the untold story of the most widely followed trial in American history and the indelible impact it has had on the judiciary, the media, and the public.

As the Los Angeles Superior Court's media liaison, Jerrianne Hayslett had unprecedented access to the trial - and met with Judge Lance Ito daily - as she attempted, sometimes unsuccessfully, to mediate between the court and members of the media and to balance their interests. In Anatomy of a Trial, she takes listeners behind the scenes to shed new light on people and proceedings and to show how the media and the trial participants changed the court-media landscape to the detriment of the public's understanding of the judicial system.

For those who think they've already read all there is to know about the Simpson trial, this audiobook is an eye-opener. Hayslett kept a detailed journal during the proceedings, in which she recorded anecdotes and commentary. She also shares previously undisclosed information to expose some of the myths and stereotypes perpetuated by the trial, while affirming other stories that emerged during that time. By examining this trial after more than a decade, she shows how it has produced a bunker mentality in the judicial system, shaping media and public access to courts with lasting impact on such factors as cameras in the courtroom, jury selection, admonishments from the bench, and fair-trial/free-press tensions.

The first account of the trial written with Judge Ito's cooperation, Anatomy of a Trial is a pause-registering narrative. It also includes perspectives of legal and journalism authorities and offers a blueprint for how the courts and media can better meet their responsibilities to the public. Even today, judges, lawyers, and journalists across the country say the Simpson trial changed everything. This audiobook finally tells us why.

"Los Angeles Superior Court media adviser Hayslett explores the ramifications of the much publicized 1995 O.J. Simpson murder trial ... insight that comes from her insider status is valuable and may leave readers wishing for her backstage access from the latest chapter in Simpsons ongoing legal battles." ( Publishers Weekly)

What listeners say about Anatomy of a Trial

Very informative, a good listen for sure.

Would you consider the audio edition of Anatomy of a Trial to be better than the print version?

I would. As I do enjoy reading, I can't always find time to sit down and actually read. This is why i enjoyed this book so much. I would listen to it in the car, on my lunch break, and while preparing dinner. It was very convenient.

This book had a lot of interesting facts but with the wrong person narrating, it can become mundane. Sheila kept me enthralled the whole time. She has the right voice to bring this story alive.

I didn't have an extreme reaction but i found it to be full of trial information that i had never heard. I have always been very interested in the Simpson murder trial. How the media involvement impacted this trial is profound. This book is full of detail and a lot of unknown facts.

Where does Anatomy of a Trial rank among all the audiobooks you’ve listened to so far?

It's the first book I've listened to and I loved the experience.

It was so informative, and easy to listen to. Makes for great driving listening!

Have you listened to any of Sheila Book’s other performances before? How does this one compare?

Like I said before, this was my first audiobook read, but as dry as the material is Sheila made it a great listen. I think she did a great job!

I remember this trial vividly but had no idea what was really going on, only what the news reported. Hearing the story as told from Judge Ito's assistant shines new light! Thank you for a wonderful story and a great listen.

Good for interesting info surrounding the trial and the day to day happenings. Not a book that concentrates on the evidence or actual trial.

I was disappointed with this work. Not only does it need substantial editing, but its title was misleading. This is a half-written essay about the effect of media coverage on Judge Ito rather than any insightful account of the legal makeup of the Simpson trial. At several points I thought to myself that I had accidentally turned back to a previous chapter, but no--this work just repeats the same two or three ideas ad nauseum while putting media participants from 1995 on blast for being horrible people. Who cares?

could have gotten a better book. best read by a law student. didn't like it.

The narrator talks at such a pace, with no gaps between sentences, it's incomprehensible and REALLY irritating

let down by the performance. it sounds like the book is being read by a robot