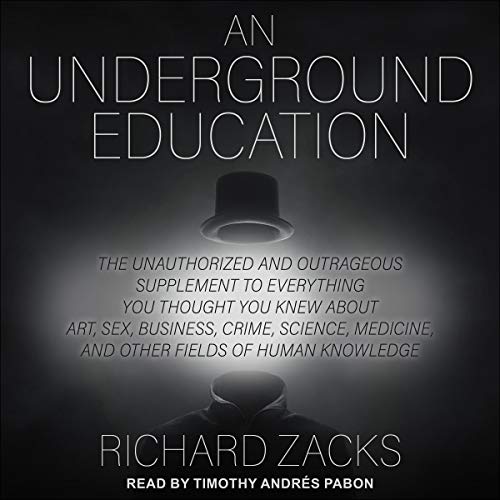 By: Richard Zacks
Narrated by: Timothy Andrés Pabon
Try for $0.00

Okay, so maybe you know all the stuff you're supposed to know. But really, is this kind of knowledge going to make you the hit of the cocktail party, or the loser spending 45 minutes examining the host's bookshelves?

Wouldn't you rather learn things like how the invention of the bicycle affected the evolution of underwear? Or that the 1949 Nobel Prize for Medicine was awarded to a doctor who performed lobotomies with a household ice pick? Or how Catherine the Great really died? Or that heroin was sold over the counter not too long ago?

For the truly well-rounded "intellectual," nothing fascinates so much as the subversive, the contrarian, the suppressed, and the bizarre. Richard Zacks has unloosed his admittedly strange mind and astonishing research abilities upon the entire spectrum of human knowledge, ferreting out endlessly fascinating facts, and stories guaranteed to make you laugh, gasp in wonder, and occasionally shudder at the depths of human depravity. The result of his labors is this quasi-encyclopedia that provides alternative takes on art, business, crime, science, medicine, sex (lots of that), and many other facets of human experience.

What listeners say about An Underground Education