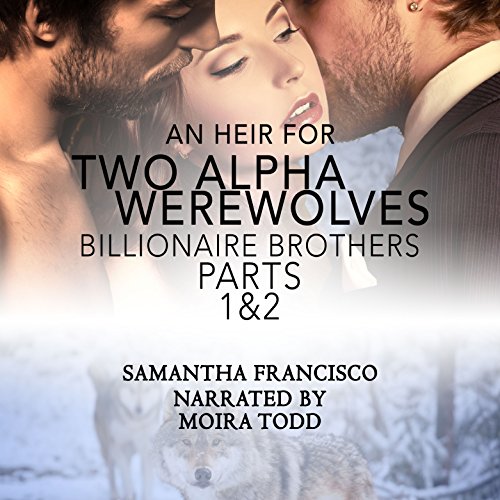 By: Samantha Francisco
Narrated by: Moira Todd
Try for $0.00

Henry and Rex von Kamp are both billionaires with the genetic ability to shift into werewolves under the full moon.

They need a strong, healthy mate to give them an heir.

Will plump and inexperienced Melissa be able to give them the heir they both desperately want?

Melissa agreed to marry the billionaire brothers Rex and Henry von Kamp.... But did she really understand what it meant to be their mate and the mother of their pups?

Can Melissa juggle her first year of college with her promise to give the brothers the heir they both desperately want?

Or will she lose everything important in her life by trying to have it all?

What listeners say about An Heir for Two Alpha Werewolves, Parts 1 & 2

This book went from zero to one hundred and back to zero again. Melissa met two werewolves one day after arriving in a new town and two weeks later she was married to both of them. What the??? Then she attends Columbia University and has a baby girl. She completes her final exam and paper then calls her husbands into the office and goes to the hospital. This was a quick listen and had a lot of sex. I believe that more substance to the story would have made it better. There should have been as much substance as there was sex. The story sped through the substance but dwelled on the sex. More balance is needed.
"This audiobook was provided by the author, narrator, or publisher at no cost in exchange for an unbiased review courtesy of Audiobook Blast."

A MUST READ FOR ANY FAN OF THE GENRE!!!

Would you listen to An Heir for Two Alpha Werewolves, Parts 1 & 2 again? Why?

I would absolutely listen to a this book again, it was an thrilling bit sized jont into another world, lead the arrousing tones of the reader Moira Todd I don't think I'll ever look at a wolf the same way again

Have you listened to any of Moira Todd’s other performances before? How does this one compare?

This is the first of Moira's performance I have heard but the quality was outstanding and her unique vocal quality had me breathing heavy the whole time.

I both wanted too and was able too since the book was so aptly length-ed...