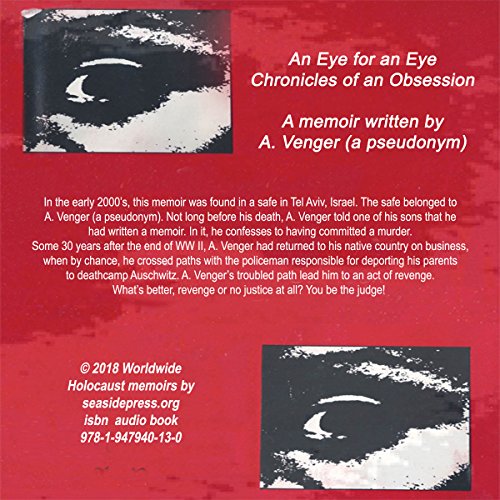 An Eye for an Eye: Chronicles of an Obsession

An Eye for an Eye: Chronicles of an Obsession

By: A. Venger
Narrated by: Alex Hyde-White

In the early 2000s a memoir titled An Eye for an Eye: Chronicles of an Obsession was found in a safe in Tel Aviv, Israel. The safe belonged to A. Venger (a pseudonym). Not long before his death A. Venger told one of his sons that he had written a memoir. In it, he confesses to having committed a murder. He assured his son that everything in the book actually happened.

After World War II, some 30 years later, when A. Venger lived in Israel, he returned to his native Germany on business. As an adult back in Germany, he serendipitously crossed paths with the policeman responsible for deporting his family to concentration camp Auschwitz, which resulted in their death. A. Venger's troubled past turned into an obsession, that led him on a path of revenge. Meticulously planned, he took justice into his own hands. He committed the perfect murder.

Today, three generations later, the impact and aftermath of World War II are still very much alive. A. Venger's family members are still divided over the truth of his memoir.

This super-paced short story is an autobiographical drama. What's better, revenge or no justice at all? You be the judge!