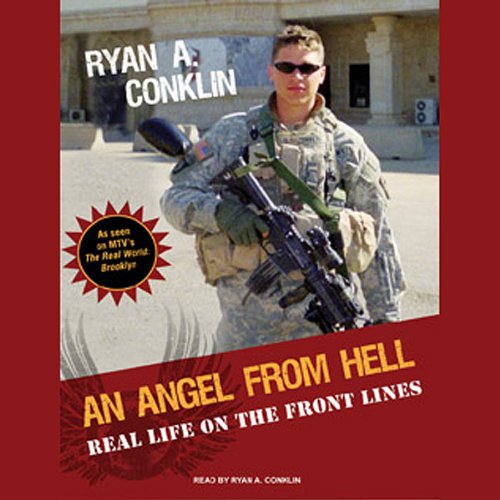 An Angel from Hell

An Angel from Hell

Ryan A. Conklin enlisted in the U.S. Army at age 17, following 9/11, and joined Angel Company. As a turret gunner with the famed 101st Airborne "Screaming Eagles" and a member of the famed "Rakkasans" regiment - the most decorated regiment in the U.S. Army - he endured hellish conditions in the war-torn city of Tikrit, Iraq. After he returned to the States, he became a cast member on The Real World: Brooklyn in 2008. That came to an end when he received his notice recalling him to duty.

An Angel from Hell is a gritty, blunt, and laugh-out-loud funny war memoir from the grunt's perspective. Conklin reveals what the Iraq war is really like, day to day - the misery, the boredom, the absurdity, the horror, and even the moments of grace. With stunning candor and wisdom beyond his years, Conklin has documented a complex and unavoidably life-changing experience for his generation.

Ryan has done a superb job not because of his mastery of language or the art of writing. While Ryan is not a formal novelist his raw, honest and genuine writing provides an extremely realistic and true to his experience adventure.

If you want to know what it is like to be a "grunt" in the Army and are open minded enough not to judge the fact that English Literature was likely not Ryan's University major, and are interested in the day to day extremely literal experience of the war in Iraq then I highly and without hesitation recommend this book. I have purchased it in CD 💿 format as well as Audible and yes it is worth the money.

I think you will find Ryan A. Conklin to have been true to himself, his experiences and his no-bull approach to telling his story appealing in every way. Once you've read it, befriend him or his fan page on Facebook and you will find a very kind person who continues to share his life experiences with his fans of which he has many!

Great job and humble thanks to you for your service and for telling us the truth of day to day grunt life. It should help aspiring soldiers by giving them the candor they need to approach this commitment with open eyes. Enjoy the book!

A new kind of war

What made the experience of listening to An Angel from Hell the most enjoyable?

This author does not try to be hardcore nor is he playing victim. He said he wrote the book as therapy and I dare say it is great to hear from him on patrol one day talking to a kid or joking with his fellow "angels". He also provide insight into the margins between life and death. Love and pain. You get to tap along to tap along and because he should be a coming you need to get ready for a lot of hard laughter. War sadly kill so keep some tissues close.

What other book might you compare An Angel from Hell to and why?

Which character – as performed by Ryan A. Conklin – was your favorite?

The pilot scene over the radio. Since it is a memoir I pick a scene rather than a person.

I would have kept the title.