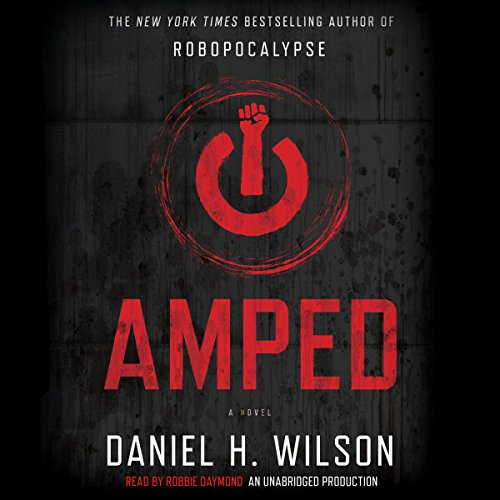 By: Daniel H. Wilson
Narrated by: Robbie Daymond
Try for $0.00

Technology makes them superhuman. But mere mortals want them kept in their place. The New York Times best-selling author of Robopocalypse creates a stunning, near-future world where technology and humanity clash in surprising ways. The result? The perfect summer blockbuster.

As he did in Robopocalypse, Daniel Wilson masterfully envisions a frightening near-future world. In Amped, people are implanted with a device that makes them capable of superhuman feats. The powerful technology has profound consequences for society, and soon a set of laws is passed that restricts the abilities - and rights - of "amplified" humans.

On the day that the Supreme Court passes the first of these laws, 29-year-old Owen Gray joins the ranks of a new persecuted underclass known as "amps." Owen is forced to go on the run, desperate to reach an outpost in Oklahoma where, it is rumored, a group of the most enhanced amps may be about to change the world - or destroy it.

Once again, Daniel H. Wilson's background as a scientist serves him well in this technologically savvy thriller that delivers first-rate entertainment, as Wilson takes the "what if" question in entirely unexpected directions. Fans of Robopocalypse are sure to be delighted, and legions of new fans will want to get "amped" this summer.

What listeners say about Amped

No Michael Crighton but still worth a listen

Some have compared Dr. Wilson, a PHD in Robotics, to Michael Crichton. While they both base their books on their scientific expertise, Dr. Wilson???s story line lacks the imagination of the writer of Jurassic Park; but it is still entertaining.
Amped is a familiar story line about discrimination between super-humans and ???mere mortals,??? (X-men). Set in the near future where people suffering from physical ailments are given neuro implants that not only correct problems such as seizures, ADHD, and Autism, but make them far superior to normal humans. As the group of Amps grows, ???normal" society starts to feel at a disadvantage and passes a law restricting the rights of the Amps. This creates a conflict between the two sides and possible war.
Running from a crime he didn't commit, the hero of the story Owen Grey has a very special implant that he must figure out what exactly it does and how it works before war breaks out.
It???s a quick listen, fast paced, and the narrator Robbie Daymond does a good job; but if you???re looking for a profound concept like extracting Dino DNA from mosquitos stuck in amber, you would be disappointed.

Some redeeming qualities. But...

Not a bad book. Some characters I liked and rooted for. And some interesting plot twists and turns. The big problem with this book is the premise and the underlying technological argument. It's just terribly hard to believe that society would shun hundred of thousands of citizens who have performance-enhancing implants. The voice in my head kept saying, "That could/would never happen..." And it spoiled the book for me. The premise behind the X-Men story is essentially the same as this book, but because having mutant power is so outside the realm of our experience, and having implants isn't, this book's assertions don't get past the brain's ability to match text with known facts.

I never got into this book. The story was anti-climactic throughout for me. In order for a book to be good (IMO) you have to feel a connection to the characters. That just never happened for me. The story line was interesting enough but did not keep my interest. I think the narrator was handicapped by the prose in this book.

What does Robbie Daymond bring to the story that you wouldn’t experience if you just read the book?

Robbie Daymond did a good job with this narration. He gave variety to the characters and voiced them in a very believable way.

At times, the tension was very palpable to me. I found myself talking to the characters to make choices they weren't ready for. Very engaging.

Very enjoyable book. I would highly recommend it to adult audiences.

Amped will give you a charge.

What did you love best about Amped?

The narration was evenly paced, voiced well, and moved the story along well.

What was one of the most memorable moments of Amped?

The moment when Owen decided how he was going to resolve the problem of his own implant.

The scene in the cemetery when the senator's back story is revealed.

Good book, moves well, entertaining. Worth the time to listen.

The book was good, a bit long and unresolved. Not sure which of the story I really felt good about. Sure the "Amps" were having problems -- but the non-Amps had a point

Have you listened to any of Robbie Daymond’s other performances before? How does this one compare?

Could you see Amped being made into a movie or a TV series? Who should the stars be?

It certainly seemed to have TV show written all over it. I picture the lead character as Matthew Morrison from Glee

If you like Sci Fi and are looking forward to the Adaptation of the sequel -- it is worth a read.

Yes! Action and intelligence combine to make a fast listen.

The dialog and character depth.

I liked trying to visualize the implanted technologies retinal projections.

If this does not become a movie, Hollywood is really missing out!

Would you try another book from Daniel H. Wilson and/or Robbie Daymond?

If you’ve listened to books by Daniel H. Wilson before, how does this one compare?

Didnt compare to robopocalypse, and could've been along the same lines but IMO it fell short.

Would you listen to another book narrated by Robbie Daymond?

Could you see Amped being made into a movie or a TV series? Who should the stars be?

Would you be willing to try another book from Daniel H. Wilson? Why or why not?

Yes, Wilson has a great story telling style and his characters are believable.

No, but very close. I finished this book in a week. Which is quick for me.

Step back from robopocalypse

Would you try another book from Daniel H. Wilson and/or Robbie Daymond?

Yes but this was dissappointing - story felt it was written in a few sessions there was very little to it and many possibilities were left unexplored or missed entirely.

Cool concept with the different levels of the zenith

Not worth the $ I used vs using a credit.