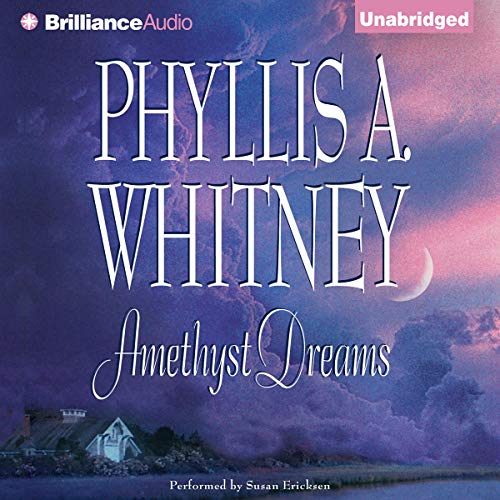 By: Phyllis A. Whitney
Narrated by: Susan Ericksen
Try for $0.00

Hallie Knight is summoned to a historic seaport town by Nicholas Trench, the critically ill grandfather of her former college roommate. Months earlier, Trench's granddaughter Susan mysteriously disappeared from his home and all attempts to learn her fate have failed. He feels that if anyone can find Susan, it will be this woman who was his granddaughter's closest friend.

IIf Hallie is to succeed, though, it won't be with the help of the suspicious relatives who surround the old man. With Susan out of the picture, who among them stands to inherit Trench's money? And why does Hallie suddenly feel so vulnerable in this outwardly peaceful seaside town?

What listeners say about Amethyst Dreams

no romance, no murder, really not even a mystery, really just kinda blah. But the narration was pretty good

I've always been a fan of Phyllis Whitney for many years. she always seems to end with a twist in her plots which I like.

An enchanting story, full of intrigue and mystery with believable characters and a touch of historical reøevance. Read beautifully.

There is little plot or depth to this book. I'd say it probably reflects the fact that towards the end of her writing career Whitney did nothing more than write travel faction, merged with a some new age psycho babble. The characters are on the whole unengaging and the mystery fails to grip or even resolve. The denoument is thrill-less, bland and unbelievable. The narrator for the main has a pleasant calm tone...until she tries what is possibly the most awful Scots accent.

An exciting story and good ending. If you enjoy murder mystery, then I would definitely recommend this book.

This book lived upto my expectations of Phyllis Whitney and was also up to her high standards of storytelling, keeping the listener enthralled as to what would happen next. Would recommend to anyone who likes murder mysteries.