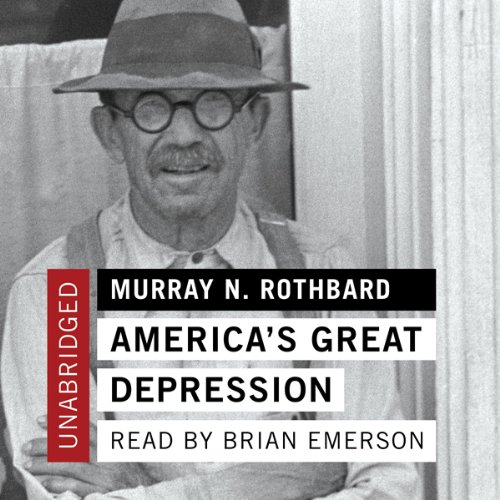 By: Murray N. Rothbard
Narrated by: Tom Weiner
Try for $0.00

Applied Austrian economics doesn't get better than this. Murray N. Rothbard's America's Great Depression is a staple of modern economic literature and crucial for understanding a pivotal event in American and world history.

The Great Depression was not a crisis for capitalism but merely an example of the downturn part of the business cycle, which was generated by government intervention in the economy. Had this book appeared in the 1940s, it might have spared the world much grief. Even so, its appearance in 1963 meant that free-market advocates had their first full-scale treatment of this crucial subject. The damage to the intellectual world inflicted by Keynesian- and socialist-style treatments would be limited from that day forward.

Murray Rothbard is one of the Austrian Economists who Rep. Ron Paul puts on his reading list. This book is very technical and requires a lot of concentration to truly understand the causes of the depression and what prolonged the depression.

This book gives an excellent account of causes of the great depression in the 20s. It uncovers banker's corruption, moral suasion, and secrets of Cal and Harding's presidency. There are unfortunately many similarities between the greenspan/bernanke fed and the fed of the 20's.

This book should be required reading for every person elected to our congress.

Murray Rothbard tells it like it is - or was

If you could sum up America's Great Depression in three words, what would they be?

Economics is normally a boring subject, but Austrian School economics tells the truth about everything. If you want to truly understand our money and what's going on you should listen to this book. I would also recommend Rothbard's other books, like What has Government Done to our Money. Richard R., Toronto

Excellent book, but not for someone looking for a biographical history filled with famous personalities or a social history looking back at everyday life during a time of 25% unemployment. This is an economic history. It is recommended for anyone who would like a detailed anaylisis of how federal monetary policy errors can cause false booms by expanding the credit money supply, leading eventually to inevitable recessionary or depressionary corrections. It also explores how Keynesian fiscal policy tends to exacerbate and extend these periods of correction. Interesting, if for no other reason than this cycle of inflationary boom and recession/depression is still with us, and the same disproven tactics are still used as treatments. Anyone interested in the history of banking, finance or economics will probably find this a good read.

If you're okay with learning every single detail about the depression, this book is for you. There is no stone left unturned regarding the depression in this book.

no one tell the hoover institute that this book exists. the truth would break their hearts.

Trying to justify "brief" but crippling depressions as better and "necessary" compared to state intervention to stave off the worst of downturn is a false dichotomy, and involves ignoring any social responsibility to fellow citizens. In order to ascribe to these views one must imagine homelessness as an easily rectified situation that you can therefore ignore; injustice as something the free market can simply buy its way out of; overall, just total ignorance of any power structures that exist in the world and just imagine dollars controlling everything.

Impossible to apply in the real world, and dangerously dishonest in the kind of way that allows justification of truly broken systems attempting to align to this method.

amazing true story of the depression

it posits theory, evidence, and effects of the application of government power on the economy.

A classic work on how the initiation of violence caused the great depression and suffocated any recovery. Unfortunately read rather fast for the complexity of the subject matter and the amount of detailed data. If you are not very familiar with economic terms, it might go a bit fast and I would recommend the paper version.

I am thoroughly enthralled by all academic work by Murray Rothbard. This is an intense economic analysis of the American economy in the 1920s and 1930s. While the audiobook is excellent, I had also purchased the Kindle and I am so glad that I read simultaneously. This audiobook was far too complicated and sophisticated for me to follow without reading along. This put me in mind of an upper level economic textbook. This is NOT an easy easy read with a flowing narrative about American social history. It is EXCELLENT... Thank You...

Maybe a little heavy on the Austrian I Told You So

This is the first Rothbard book I have read, by way of disclosure, but I have spent a lot of time in the last year reading about the rise of modern banking, as well as classical economics, and I read Mises' Socialism in the last year, as well. At a basic level, this book does a nice job of explaining the role of governmental intervention in boom/bust cycles and applying Mises' theory to the Great Depression. It does not spend a lot of time explaining late 19th century banking or early 20th century banking, so it does assume the reader knows some things about how runs occur, what fractional reserve lending is, how it worked during the late era of the gold standard, etc. Probably the greatest current relevance of this book is that it applies Mises to American boom / bust cycles and it emphasizes the role of government actions that encouraged the boom. The problem is nobody wants to restrain booms (through action or inaction), and so discussion in the public discourse of this kind of Austrian approach always seems to only occur during the bust cycle and we never really learn our lesson. Rothbard raises excellent points about forms of intervention that are counterproductive or yield paradoxical results, although even by Austrian standards this book can feel snide at times (Mises, himself, is overbearing, especially compared to the much more thoughtful approach of Hayek, although in the places where he's right, he's just plain right, and what can one do...). I do feel a little as if this particular book does not really reveal as much of Rothbard's own thinking (although it is certainly present when comparing what is said here to Mises himself), but it is a nice analysis, albeit it should probably be read in the context of other perspectives on the matter.

The narration style is dry, but production quality is good, the narrator is easily understood, and overall this is a well produced rendition that is easy to listen to while commuting.

provides a lot of facts to accompany the narrative. these bolster the understanding of how money supply moved around for example. also details time prior to 1929 crash where a lot of seeds were sewn that germinated within the crash.

Depressed that I wasted a credit on it!

Okay my rating and title are perhaps a little unfair. I think the problem is that Audiobooks have placed it in the History section and I suppose, lured by the picture, I thought it was going to be an historical account.

Unless you have a PhD in Economics and have run several international monetary funds and a couple of central banks I would advise you to steer well clear of this. I think even the Governor of the Bank of England would wonder what on earth it is all about!

I confess I only listened to about 40 minutes of it on the bus but that was enough and the other passengers were complaining because I was inadvertently chewing my right leg off in agony!

I am sure for Economists it is great and I am sure the author really knows his stuff but Audiobooks I politely say that you really do need to re-classify this away from the History section.

Again I am trying to be broad-minded and all-embracing but have to say if the first 40 minutes was anything to go by it is really difficult to see why anyone would want to listen to this as an audiobook. A textbook fine, as an academic work that you can cross-reference, refer back through etc.but not an audiobook to listen to when mowing the lawn (you would probably throw yourself under the blades!).

Clearly explains the real causes of the Great Depression and how government intervention acted to prolong it. Provides economic theory that cuts through the anti-laissez faire mythology of Keynesians and Monetarists to provide a well reasoned and accurate history of this period.

Highly recommend to anyone critical of the modern banking system and government intervention. Recommend even more to people who aren't!