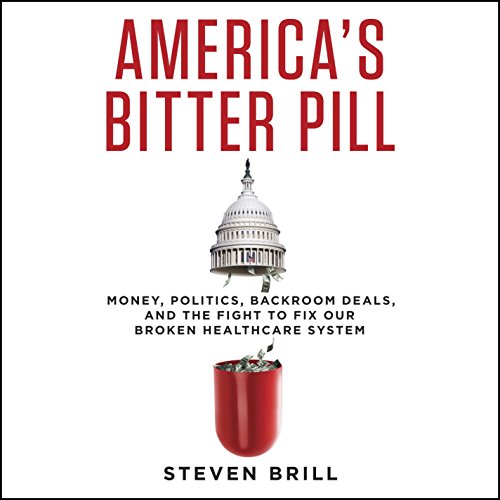 America’s Bitter Pill is Steven Brill’s acclaimed book on how the Affordable Care Act, or Obamacare, was written, how it is being implemented, and, most important, how it is changing - and failing to change - the rampant abuses in the healthcare industry. It’s a fly-on-the-wall account of the titanic fight to pass a 961-page law aimed at fixing America's largest, most dysfunctional industry.

It's a penetrating chronicle of how the profiteering that Brill first identified in his trailblazing Time Magazine cover story continues, despite Obamacare.

And it is the first complete, inside account of how President Obama persevered to push through the law, but then failed to deal with the staff incompetence and turf wars that crippled its implementation.

But by chance America’s Bitter Pill ends up being much more - because as Brill was completing this book, he had to undergo urgent open-heart surgery. Thus, this also becomes the story of how one patient who thinks he knows everything about health-care “policy” rethinks it from a hospital gurney - and combines that insight with his brilliant reporting. The result: a surprising new vision of how we can fix American health care so that it stops draining the bank accounts of our families and our businesses and the federal treasury.

“An energetic, picaresque, narrative explanation of much of what has happened in the last seven years of health policy.... [Brill] has pulled off something extraordinary.” (The New York Times Book Review)

“A thunderous indictment of what Brill refers to as the ‘toxicity of our profiteer-dominated healthcare system.’” (Los Angeles Times)

“A sweeping and spirited new book [that] chronicles the surprisingly juicy tale of reform.” (The Daily Beast)

“One of the most important books of our time.” (Walter Isaacson)

“Superb...Brill has achieved the seemingly impossible - written an exciting book about the American health system.” (The New York Review of Books)

"A landmark study, filled with brilliant reporting and insights, that shows how government really works - or fails to work." (Bob Woodward)

"America's Bitter Pill is deeply impressive, an important diagnosis of what America needs to know if we’re ever to develop a healthcare system that is fair, efficient, and effective." (Tom Brokaw)

"In America's Bitter Pill, Steven Brill brilliantly ties together not only the saga of Obamacare, but also the larger story of our dysfunctional healthcare system and its disastrous impact on both businesses and ordinary Americans. In a gripping narrative, his thorough reporting is made all the more powerful by his own scary experience looking up from a gurney." (Arianna Huffington)

As a generalist physician who has spent the last 35 years inside the system, the exposure of the true guts of the system, was elucidating and disquieting. For administrators of this system to be paid so much more than those who actually deliver the care is disquieting too. Incentives are displaced badly.
I do not know if Brill's suggestions at the end of the book would work, but they would allow true market forces to work on efficiency and competence.
I finished the book enlightened and discouraged about the future of my profession.

Steven Brill offers the most complete history to date of the roll out of the Affordable Care Act (Obamacare). He gives a behind the scenes perspective that spares no one, be it Congressional Democrats who passed the ACA using back room deals, Republicans who opposed the law without offering an alternative, or the leaderless and bumbling effort by the Obama administration to implement health insurance exchanges. The book gives a solid, albeit opinionated, history until its end, where Brill steps out of his role as historian to speculate about how he would fix America's healthcare system if given the power. His prescriptions for success are interesting but unconvincing, giving an otherwise impressive bit of modern history a tepid coda.

It had some good information although not particularly revelatory if you were at all politically aware during the implementation of the ACA. Personally I feel the author did every sort of logical (or non-logical) mental gymnastics to come to the conclusion that is spite of all of the problems with its passage and implementation, the country is better off because of the ACA , and now all we have to do is pass more regulations through, for example, the FTC so that we really fix health care for good. I tried to keep an open mind during this story but still come to the opposite conclusion. In spite of the authors attempt to convince me otherwise, I think the ACA is and will make America worse off in the long run. Regardless of my opinion about the ACA,
the book itself was decent.

The agony and ecstasy of Obamacare

Steven Brill provides a critical analysis of the development and implementation of the Affordable Care Act (ACA). Brill starts with the 2008 Democratic Primary, where Barak Obama seemed underprepared to provide a substitutive healthcare plan compared to Hillary Clinton. Recognizing his short-comings, Obama launches himself into the issue that will serve to define his legacy. Brill provides the details on the political deals, players, compromises, and negotiations that allowed the ACA to become law.

Brill does an expert job to describing the ACA registration rollout fiasco and the herculean efforts needed to create a functional enrollment website under immense political pressure. There are also numerous stories of ordinary people with significant health conditions and how they were affected by the ACA.

The problem with America’s Bitter Pill (ABP) is the big take away, although universal health coverage is terrific the ACA lacks the regulations to contain consumer costs. This issue is due to the fact that the ACA was written to protect the financial interests of insurance providers, hospitals, pharmaceutical companies and medical equipment suppliers. ABP reminded me of Otto von Bismarck’s famously stated quote “Laws are like sausages, it is better not to see them being made.”

An Important Book for Everyone

Would you listen to America's Bitter Pill again? Why?

No--I do not listen to books more than once. I have too many that I still need to get to!

What was one of the most memorable moments of America's Bitter Pill?

There were so many unbelievable scenarios and anecdotes in this book that I found myself constantly amazed by what I did not know until I listened to the book. One that stands out is a man who had pneumonia and was hit with a $143,000 lab bill from the hospital for which he was personally responsible. Or the previously uninsured woman who had significant health issues but could not afford her medication. The author suggested that she look into her state's new insurance exchange and she said that she would never get "Obamacare" because her political representatives said that it was bad and would not cover current illness. She did get insurance through her state exchange (she did not realize that it was possible because it was "Obamacare") and then got her heart disease and diabetes under control.

Which character – as performed by Dan Woren – was your favorite?

Steve Beshear, the governor of Kentucky, got on the band wagon early and set up Kynect, KY's health exchange. KY is one of the worst states for health outcomes and issues. This exchange was created under budget, on time, and was working when the federal exchanges did not.
I also enjoyed that Mitch McConnell, the representative from KY, finally said he liked Kynect but not Obamacare--not explaining to his constituents that they are the same thing!

This is a brilliant book which caused me to experience many emotions--mostly frustration and incredulity, and a few laughs at the craziness of the political struggles. The absolute vitriol leveled by all sides of the debate (there were many sides) was so disgusting that I had to laugh.

In addition to understanding the difficult birth and life of the Affordable Care Act, I found that I learned even more about the medical and insurance industries pre-Act. I have always had good insurance so never really paid attention to what was going on behind the scenes. Brill has done an outstanding job in making this complex issue understandable and interesting.

"In Defense of the ACA" is a more appropiate title

Would you try another book from Steven Brill and/or Dan Woren?

Would you ever listen to anything by Steven Brill again?

Completely biased analysis. Author is incapable of lending a serious critical eye on the shortcomings of the ACA and where it desperately needs improvement. The author focuses on a handful of cases where patients benefitted from the act while completely ignoring those negatively impacted.

I rarely do book reviews. As former Hill staff close to this topic, I completely enjoyed the behind the door stories, easily digestible yet compelling data, and hopeful suggestions at the end. I highly recommend everyone having any strong views on this topic first read this book and reexamine one's, including my, probably limited understanding. Last but importantly, this book is long but highly entertaining.

I read on average two books each week. Steven's brilliant style, clever approach and direct questioning is the heart of a book that should be part of the curriculum in high school civics/social studies classes. Truly enthralled with this work. Don't miss this because it effects everyone going forward for decades to come.

is what it should have been titled. the author demonstrates the ability to hold two conflicting views at the same time: at once chronicaling the federal government's near complete failure to execute on something as simple as a website and at the same time extolling the virtues of government run healthcare. at the same time vilifying private sector business, he notes that only when private sector business people got involved was the debacle saved. the degree to which his opinions on the pharmaceutical industry and hospital charges were I'll informed causes me to call into question his claims in other areas. I'll never get that time back.

I was very interested in this book before I read it. And now I can say this book answered lots of questions I have had for a long time.. I'm glad I read this book and can see now I will need to re-read it amny times. I highly recommend this book to everyone.