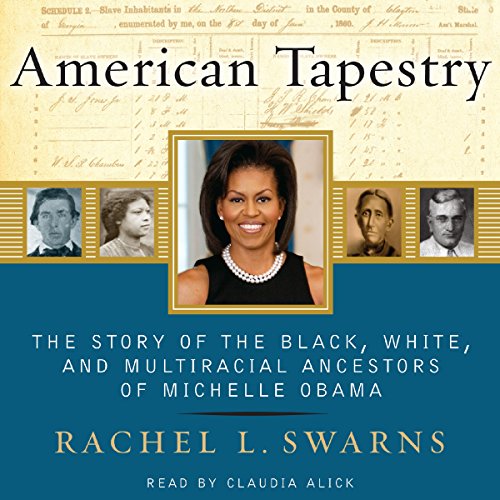 By: Rachel L. Swarns
Narrated by: Claudia Alick
Try for $0.00

Michelle Obama's family saga is a remarkable, quintessentially American story - a journey from slavery to the White House in five generations. Yet, until now, little has been reported on the First Lady's roots. Prodigiously researched, American Tapestry traces the complex and fascinating tale of Michelle Obama's ancestors, a history that the First Lady did not even know herself. Rachel L. Swarns, a correspondent for the New York Times, brings into focus the First Lady's Black, White, and multiracial forebears, and reveals for the first time the identity of Mrs. Obama's White great-great-great-grandfather - a man who remained hidden in her lineage for more than a century.

American Tapestry illuminates the lives of the ordinary people in Mrs. Obama's family tree who fought for freedom in the Revolutionary and Civil Wars; who endured the agonies of slavery, the disappointment of Reconstruction, the displacement of the Great Migration, and the horrors of Jim Crow to build a better future for their children. Swarns even found a possible link to the Jewish Reform movement.

Though it is an intimate family history, American Tapestry is also the collective chronicle of our changing nation, a nation in which racial intermingling lingers in the bloodlines of countless citizens and slavery was the crucible through which many family lines - Black, White, and Native American - were forged.

Epic in scope and beautifully rendered, this is a singularly inspiring story with resonance for us all.

What listeners say about American Tapestry

A unique look at history

I definitely agree with the person who described this book as "epic in scope and beautifully rendered." Rachel Swarms was expecially adept in portraying the family members within their historical context, bringing alive not only these particular individuals but nameless others who shared their experiences.

I couldn't help thinking that this book is a special gift to the Obama daughters. But even if the subject had not been the family of a woman I admire and respect immensely, I would have appreciated reading about the various people who were uncovered in the book. It was fascinating to see how decades of family history were pieced together from records and memories that were often scanty.

On the down side, I had some difficulty following the chronology via audio. It was difficult to keep up with the generations, especally as the narrative is not linear but doubles back many times to pick up various strands. This audible selection should come with a pdf giving a graphic family tree and as many photos as possible.

This is not about Michelle Obama, it's about how tightly linked the races were even during slavery and segregation. Some of the details of the family's history are elusive but the overall picture of American society is clear, ante-bellum, during reconstruction, and through the last century.

While the genealogy of Michelle Obama is interesting, the author’s research of the historical background of Mrs. Obama’s ancestors is truly informative and interesting. I learned a lot.