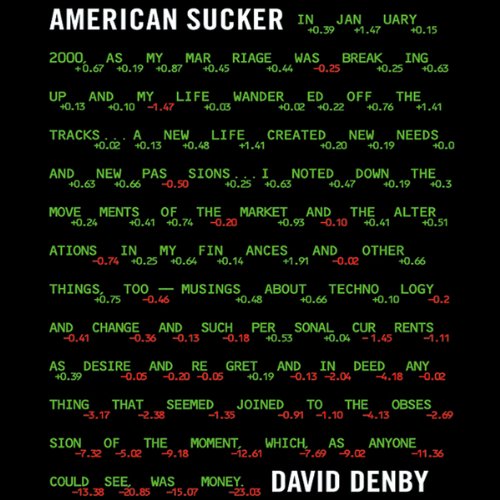 By: David Denby
Narrated by: Dennis Boutsikaris
Free with a 30-day trial

David Denby was a happy man, a content man with a good job, a wife and two sons, and an Upper West Side apartment. But in 2000, his wife asked for a divorce and he needed to hold onto his beloved home. Denby's account of his frenetic, irrational lurch toward the gold parallels the wild, dangerous and finally tragic era of an inflated stock market, inflamed greed, and the willful blindness of the nation during the first three years of the millennium.

Seduced by stock analysts, CNBC, tech gurus, and lying CEOs at investment conferences, Denby plunged into a season of mania. He befriended people like ImClone founder Sam Waksal and Merrill Lynch analyst Henry Blodgett, both now disgraced by scandal. As he explores his own motives, actions, and illusions, Denby reveals the underbelly of the irrationally exuberant beast that clutched the throat and brains of most Americans during the late 1990s and early 2000s. American Sucker is a wise, bitter, humorous, and candid memoir that documents one man's confrontation with midlife changes, money, illusions, and shifting values.

"Denby is always worth reading, but he really tops himself in this riveting apologia." (Booklist)
"His dissection of his own Upper West Side narcissism offers some of the most candid critiques of the Manhattan bourgeoisie ever found outside of a Woody Allen film." (Publishers Weekly)

What listeners say about American Sucker

I always go for the unabridged version, but in this case, I'm very relieved there wasn't one. There were very few spots I enjoyed in this book (reminiscences about his family, profiles of people, etc); I concur with the reviewer on Amazon that the book could have done with fewer ramblings on the stock market. It is of course a book of confessions on one's obsessions with stock trading (and a few other obsessions), and therefore would probably strike more of a chord with people with similar experiences. For others, including those who can identify with some of the issues here, this may prove to be too much "jabbering", as Denby admits at the outset of the book.

(Heavy sigh) - I wish there was more to say than, "been there, heard it all before," but there isn't. Another '90's Yuppie wakes up and discovers life is more that what he's been wasting his life on. Yawn. Not a bad book if you haven't read this genre before. If you have, don't waste the credit or the time.

A very candid first person account of the excesses of the late 90 's tech stock "bubble", viewed from the perspective of an "average" individual investor, except that the author got to know Sam Waksal and Henry Blodget personally.

Some of the meditations on the seven sins are too long and winded; but overall, I found the book revealing and interesting.

Investing is about EQ much more than IQ

This will never be a particularly popular book; it’s too earnest, too raw, and too pretensions. Nevertheless if you can endure through it; you’ll probably find it rewarding.

I’ve been invested almost exclusively in technology since ’77, and continue to invest heavily in this sector even today. Not being old enough to remember the 1929 bubble the Y2K bubble although a normal phenomena (I’ve seen many times) was of an unpredicted scale in my lifetime. Perhaps because I’d been in tech. since the days when DEC was a hot stock, I avoided the worst of the farce of the Y2K bubble. But it still had an affect on my thinking.

I think that the key lesson of this bubble (and probably most) is that emotional quality matter more than intellect when investing. If you don’t already believe this you’ll find the book to be self absorbed and irrelevant. If you happen to already know this you may find this to be one of the more practical books on investing written in the last decade.

A total waste of time and money

I looked forward to hearing an entertaining book about one investor's travails during the stock market boom-and-bust of the late 1990s and early 2000s. Written in a style that favors exposition rather than brevity, this is one of the most boring audiobooks I have ever heard. Apparently, the author found this writing therapeutic (and cheaper than psychoanalysis), for the book delivers a rambling discourse on the author's marital woes, pornography, impotence, and a host of other topics unrelated to the stock market. Other than learning that the author was an incredibly foolhardy -- and foolish -- investor, the reader can take very few lessons from this saga of greed. Author David Denby apparently feels likes a "sucker" because he lost his shirt in the stock market. He did so because he failed to appreciate the risks of investing and ignored the many red "danger" flags waved in his face during the market collapse. Potential purchasers of this book are hereby given a red "danger" flag of their own: if you are looking for an interesting book about the Internet boom/bust, this is NOT the book. This book is pretentious and a total waste of time and money. Buy this book and you will undoubtedly feel like a "sucker" for doing so.