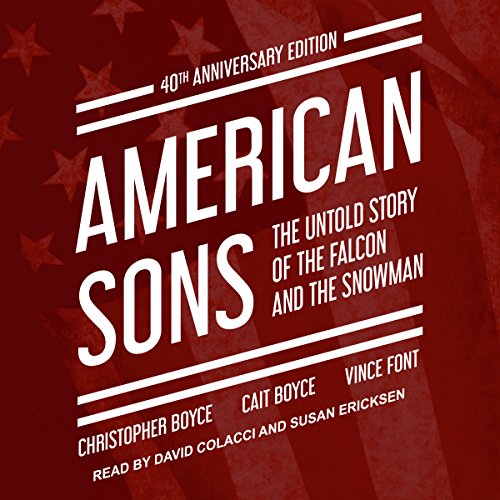 Forty years before the names Snowden and Manning entered the world's cultural lexicon, Christopher Boyce and Andrew Daulton Lee became America's youngest convicted spies - condemned to federal prison in 1977 for their roles in one of the most highly publicized espionage cases in Cold War history. Yet the story of their crime, as told in the book and movie The Falcon and the Snowman, was only the beginning.

Locked away in some of the country's most violent and inhospitable prisons, Boyce and Lee survived repeated attempts on their lives and years of solitary confinement before a young and idealistic paralegal, Cait Mills, attempted to put them on the path to freedom. Diagnosed with an aggressive form of cancer, Mills' determination to continue her work while battling the illness ultimately changed all three of their lives.

American Sons: The Untold Story of the Falcon and the Snowman is an incredible true story told by the people who lived it - a narrative of survival against impossible odds, a case study on the indomitability of the human spirit, and a testament to the transformative power of forgiveness.

I guess I was looking more for the Falcon and the Snowman... I enjoyed the book though. I was hoping more for the story of how Boyce and Lee got into prison rather than how they got out. But overall it was a very informative and interesting read. It truly is the untold side of the story. Great performance by the narrators.

Spellbinding story of a 1970s case of espionage by two very young men and a paralegal (Cait) who decides to help one (Daulton) and then the other (Chris) on the path to freedom. Apparently, the original story along with Chris's prison break and subsequent bank robberies were the subject of a movie (Falcon and Snowman) that I had not heard of. This edition of their story and Cait's story to set both Daulton and Chris on the road to freedom as well as fighting her own battles with cancer tells the story of the prison system and a love story that is worth sinking your teeth into for a weekend read. This is an excellent book that includes perspectives of Chris, Cait, and author Vince Font. Having male and female segments narrated by chapters is helpful to keep the perspectives flowing. The descriptions of how Chris feels at times is gripping and very explanatory of the stress/panic still present even when freedom is gained. The book would be a really good book for high school students to consider reading/listening. Excellent all around!

Amazing Story but left out some significant detail

Having originally only been exposed to the movie that was only a slice of an amazing life. Christopher and Cait's story really needed to be told, an amazing tale of determination and fortitude and equally amazing love story. The part of Chris's life post jailbreak was completely left out which included is run of bank robberies the reason for this was that it was covered in another book. I felt like that was horseshit and really wanted to know what was going through his head at the time and people that were surrounding him as well as what life was like during that period.of time. Maybe he didn't want to incriminate some of these people if so that could have been worked around. I felt like that segment of time was really significant and wildly fascinating to me and that was a real let down, Overall it is a very worthwhile story and well written.

Political from the start

Anti American, anti Trump liberal garbage. Praises Snowden and Manning as "Heroes." Even as a LibertarianI couldn't tolerate the bias. For Barack and Hilary fans only.