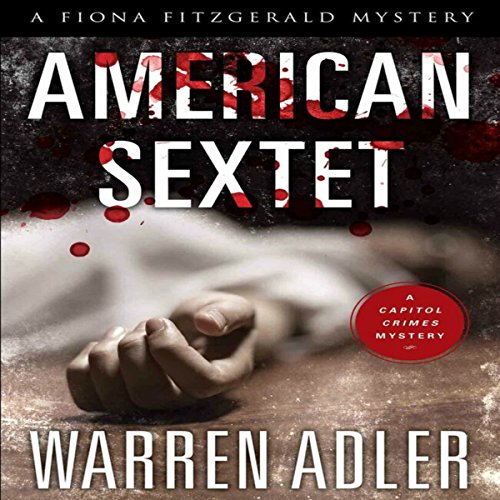 By: Warren Adler
Narrated by: Lillian Yves
Try for $0.00

Detective Fiona Fitzgerald is an unlikely force for justice in Washington, D.C.'s predominantly male police force. As a senator's daughter and top investigator in the homicide division of the Metropolitan Police Department, Fiona maneuvers between two vastly different worlds, moving quickly from opulent state galas to gritty crime scenes. Born into the elite social circles of the nation's capital, and armed with intimate knowledge of the true face of the political establishment, Fiona is determined to expose the chicanery concealed within the highest echelons of the American political aristocracy.

Former Washington Post reporter Jason Martin knows there's something secretive going on in the high echelons of politics, and he's determined to find a way to prove it. Beautiful and naïve Dorothy Curtis becomes the key to Jason's plan, which he hopes will put them both back on track. Can he give the sextet of the most powerful men in Washington an expiration date on their greedy endeavors?

When Dorothy's body is found at the bottom of the Duke Ellington Memorial Bridge, everyone assumes it was suicide over a lover. But Fiona Fitzgerald has her doubts. Fiona knows that in this town, power and money come before love. Unfortunately, this death hits a little too close to home, and Fiona wrestles with her own feelings about love as she finds herself empathizing with Dorothy. When Fiona and Jason collide, the power lies in the truths they reveal, truths that will bring down the sextet and help them both come to terms with their own demons.

What listeners say about American Sextet

A solid thriller with unforgettable characters

Where does American Sextet rank among all the audiobooks you’ve listened to so far?

It's a solid mystery, well written and well paced. I'd say it's in the top 80% of audioboks I've listened to.

The character of Dorothy, and the interwoven plot.

Lillian Yves' read was very smooth and engaging. It was easy to follow the multiple characters and she added just the right amount of acting to keep the story exciting.

The opening drew me in and kept me going. No extreme reaction, just a solid, interesting mystery.

What a tangled web he weaves...

What did you love best about American Sextet?

What other book might you compare American Sextet to and why?

American Quartet, the first book in the Fiona Fitzgerald Mysteries series. I prefer this book as I am enjoying seeing the development of Fiona as a character.

What does Lillian Yves bring to the story that you wouldn’t experience if you just read the book?

She brings all the characters to life in a way that I don't think I would have appreciated by reading the book myself. Her voice modernises the story and brings it forward to the 21st century beautifully.

'No Place for Good Women'