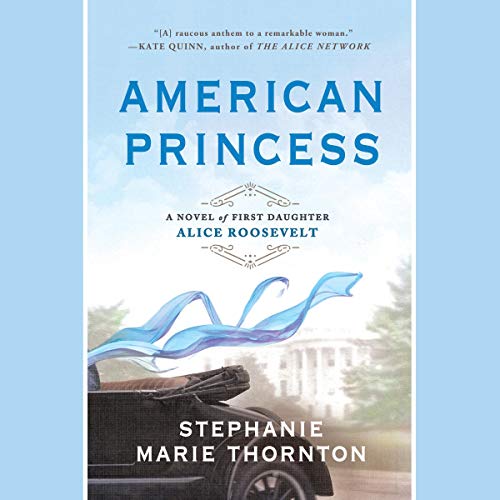 By: Stephanie Marie Thornton
Narrated by: Elizabeth Wiley
Try for $0.00

“As juicy and enlightening as a page in Meghan Markle's diary.” (InStyle)

Alice may be the president's daughter, but she's nobody's darling. As bold as her signature color Alice Blue, the gum-chewing, cigarette-smoking, poker-playing first daughter discovers that the only way for a woman to stand out in Washington is to make waves - oceans of them. With the canny sophistication of the savviest politician on the Hill, Alice uses her celebrity to her advantage, testing the limits of her power and the seductive thrill of political entanglements.

But Washington, DC, is rife with heartaches and betrayals, and when Alice falls hard for a smooth-talking congressman, it will take everything this rebel has to emerge triumphant and claim her place as an American icon. As Alice soldiers through the devastation of two world wars and brazens out a cutting feud with her famous Roosevelt cousins, it's no wonder everyone in the capital refers to her as the Other Washington Monument - and Alice intends to outlast them all.

"Epic in scope and rich in immersive detail, American Princess is a compelling and poignant tribute to one of America's most colorful, unconventional, and trend-setting women. Highly recommended read!" (Laura Kamoie, New York Times best-selling coauthor of America's First Daughter and My Dear Hamilton)

"The wild, wonderful, outsize personality of presidential daughter Alice Roosevelt is on full and fantastic display in this lightly fictionalized take on her unapologetic, unconventional life.... Alice herself would undoubtedly have loved this take on her unorthodox life - as will the many destined to read it.” (Publishers Weekly)

"Thornton skillfully brings to life the incomparable and unapologetic Alice Roosevelt, whose scandalous life was at the center of American politics for nearly a century. Fast-paced and written with verve and sass, this book is a treat and a treasure for history lovers. Fabulous!" (Stephanie Dray, New York Times best-selling coauthor of America's First Daughter and My Dear Hamilton)

What listeners say about American Princess

Terrible book, unless you like network tv afternoon soap operas. Could have been a good story about an interesting woman, who lived in interesting times, surrounded by interesting people. Instead, we are given a silly little old woman, recounting a silly little life. It comes as no surprise Eleanor Roosevelt disliked the woman who is characterized in this novel. She had good sense.

Loved discovering the real Alice Roosevelt Longworth. There is so much beyond her famous quotes

what a life lived.

What a life this woman must have lived, to be present in so many historical moments in her time. Life had to have been very hard for her but it's almost as if her father is telling her to buck up and handle it. I had heard of Alice but had never read anything about her. Am I glad I picked this book up on a whim.

What a wonderful depiction of Alice Roosevelt Longworth's life story. I was sad when it ended. I could listen to tales of her escapades for hours on end.

I had no inkling that the story of Alice Roosevelt could be so interesting. She made an impact on the social scene but she also made an impact politically. Historical fiction at its finest.

Angela Lansbury's narration of this book was magnificent! I could totally visualize what Alice looked and acted like. I am not an avid reader but really enjoyed this bood!!

Really enjoyed this novel based on the life of Alice Roosevelt, an icon of American history. Read with great characterization and enjoyable variations! Want to learn much more about this fascinating woman!

This book started out a little slow. But about 20% in it took off. Would recommend to anyone who enjoys a good story about our American history.

I had my doubts starting this book, until 5 minutes in. Captivating, interesting and informative!

The author has revived old Alice in an account that is both personal and inspirational.